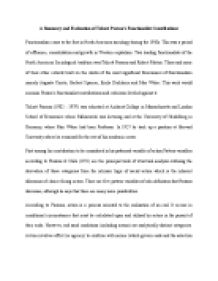 A Short Summary and Evaluation of Talcott Parsons Functionalist Contributions

Transfer-Encoding: chunked ﻿A Summary and Evaluation of Talcott Parson?s Functionalist Contributions Functionalism came to the fore in North American sociology during the 1950s. This was a period of affluence, consolidation and growth in Western capitalism. Two leading functionalists of the North American Sociological tradition wereTalcott Parsons and Robert Merton. These and some of their other cohorts built on the works of the most significant forerunners of functionalism namely Auguste Comte, Herbert Spencer, Emile Durkheim and Max Weber. This work would examine Parson?s functionalist contributions and criticisms leveled against it. Talcott Parsons (1902 - 1979) was educated at Amherst College in Massachusetts and London School of Economics where Malinowski was lecturing and at the University of Heidelberg in Germany, where Max Weber had been Professor. ...read more.

According to Parsons, action is a process oriented to the realisation of an end. It occurs in conditional circumstances that must be calculated upon and utilised by actors in the pursuit of their ends. However, end sand conditions (including means) are analytically distinct categories. Action involves effort (or agency) to conform with norms (which govern ends and the selection of their means of realisation) since it must transform circumstances. Actors must accommodate and calculate upon conditions if their actions are to be successful. Further, he held that social systems are characterized by needs of functional prerequisites. Functional prerequisites refer to the extent to which people?s relations to others are embedded in or constrained by social subsystems. ...read more.

In response to his work and ideas, some scholars have criticized his work. Some say his quick rise was precedence to his fast fall. Some of the criticisms leveled against him are summarized as follows. Parsons argued that modern society or ?modernity? has seen a general shift in favour of universalism, performance, specificity and affective neutrality. This idea if held would not be able to explain huge acts of charity works carried out by the affluent of today. He did not cite a practical example of a society that has ever practiced the AGIL ? scheme he postulated. The idea has remained more theoretical and has lacked evidence of full practice. While it has often been said that individuals are sacrificed to systems in Parsons? structural-functionalism, there has been an ideologically expedient tendency in today?s neo-liberal ?individualistic? world to neglect social structure and the systemic properties of society. ...read more.