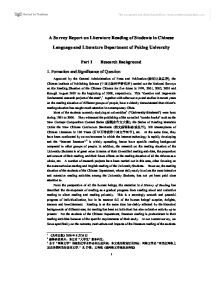 A Survey Report on Literature Reading of Chinese Students

A Survey Report on Literature Reading of Students in Chinese Language and Literature Department of Peking University Part I Research Background 1. Formation and Significance of Question Approved by the General Administration of Press and Publication (??????), the Chinese Institute of Publishing Science (?????????) carried out the National Surveys on the Reading Situation of the Chinese Citizens for five times in 1999, 2001, 2003, 2005 and through August 2007 to the beginning of 2008, respectively. This "durative and large-scale fundamental research project of the state",1 together with other surveys and studies in recent years on the reading situation of different groups of people, have evidently demonstrated that citizen's reading situation has caught much attention in contemporary China. Most of the students currently studying at universities2 ("University Students") were born during 1985 to 2000. They witnessed the publishing of the so-called "combo books" such as the New Concept Composition Contest Series (???????), the Series of Reading Materials Under the New Chinese Curriculum Standards (?????????), 100 Masterpieces of Chinese Literature in 100 Years (????????????), etc. At the same time, they have been confronted by an environment in which the internet technology is rapidly developing and the "internet literature"3 is widely spreading, hence have specific reading background compared to other groups of people. In addition, the research on the reading situation of the University Students is of great value in terms of their diversified reading activities, the proportion and amount of their reading, and their future effects on the reading situation of all the citizens as a whole, etc. A number of research projects have been carried out in this area, often focusing on the extracurricular reading and English reading of the University Students. However, the reading situation of the students of the Chinese Department, whose daily study involves the most intensive and extensive reading activities among the University Students, has not yet been paid close attention to. ...read more.

From the perspective of novel, among all 23 interviewees who chose A Dream of Red Mansion, 19 are female. In the category of essay, Chuang Tsu has won the first place among all pre-Qin essays. In opera script category, students pay more attention to works than writers. Overall speaking, interviewees prefer poetry and novel to other types. Opera script receives less attention. It may because the script without stage performing cannot fully illustrate the charm of opera. The Peony Pavilion, as an exception, receives more attention because of the popularity of Kunqu Opera recently. As far as we know, many people read the script as preparation of going for the show in theatre. 2. Understanding of pre-Qin period classics As a student in Chinese Department, it is the basic requirement to read the classics. And pre-Qin, pre-Han, and post-Han literature works have been seen as the origin of Chinese literature. It is difficult but still important to read them through. And Chinese Department has set specific courses on these works. Therefore, in the survey, we emphasize on the "completion" of the reading. The Percentage of Completing the Readings among All Interviewees The Analects 93.5% Mencius 38.7% Chuang Tsu 20.4% Tao Te Ching 17.2% Book of Poetry 16.1% The "Four Books" 16.1% Records of Historian 9.7% 92 valid responds were collected out of 93 answers. Generally speaking, the 7 works shows above are almost read completely. Besides these, some students have read Han Fei Zi and Zuo's Commentary completely. Among all the works, The Analects has taken the leading position by a large margin. There're 87 students in all 4 grades who have completed the reading of The Analects, takes a percentage of 93.5%. From the perspective of grades distribution, freshmen have a concentrated experience of completely reading, namely, on The Analects. There're also 2-3 students who complete Mencius, Chuang Tsu, and Tao Te Ching, respectively. ...read more.

One fourth of the interviewees have completely read The Four Classics, even there are influences of the TV drama based on these novels, but the overall condition is optimistic, among them, 73.5% have completely read Dreams of the Red Mansion. Within modern and contemporary literature, Lu, Xun is still the most-read author during the college years of the interviewees. The Seventeen-Year Literature is read mostly due to course requirements, but overall it's not widely read. For contemporary poetry, many interviewees admit they "don't like it", but Hai Zi, Gu Cheng, Bei Dao, Shu Ting, Xi Murong and many other famous poets in the 80s are still popular among the interviewees, i.e., majors in Chinese Language and Literature, but necessary understanding of these poets are not in place. As for online reading, most of the interviewees are more used to the traditional paper copies. While online reading (including online magazines and journals, literature section on BBS, blogs, and other spaces where online literature exists), are taking a role in the overall reading trend that we can't neglect. Online literature portals - qidian.com, readnovel.com, and the like, and some genres made popular on the Internet - Fantasy Literature, BL Literature, and the like, are having considerable readers. This phenomenon, along with more complicated issues behind it, is worth further investigation. The reason of reading are mostly quoted as "for course requirement", other major reasons include "learn knowledge, broaden horizon, self-cultivation" and so on. "Honing literature appreciation skills and prepare for writing" are also reasons for some of the interviewees. Course requirements of the Chinese Language and Literature Department have a major influence on literature reading of most of the students. Entering this department made a significant shift in reading habits of a lot of the interviewees, not only in the scope and content of reading, but also in depth, method, writing and book collection. Being a major in this department is the key reason that leads to the variety of reading as discusses above. But we shouldn't neglect that for those students who chose this department themselves, it's their existing reading that brought them here. ...read more.