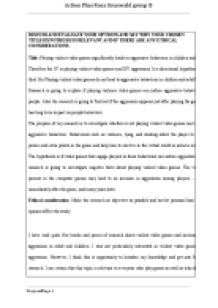 Action Plan for research into the effects of playing violent video games.

It was fairly easy to find books in the library but it was not easy to come across any online journals because typing the keywords into the browser alone did not result in any research that was relevant. I went to the helpdesk in the library and the lady showed me how to do a shortcut of research in journal articles by using keywords. I formulated a hypothesis and this represented my particular interest in the negative effect of violent video games on children?s and adults? behaviour. At first it was difficult to think about my hypothesis because I have never done this before and everything seems unfamiliar. However, I am looking forward to getting deeper into the literature review and finding empirical evidence to find out if my hypothesis is valid. I have prepared my proposal, and it seems to be neat and clear about what I am interested in and what I intend to do. I was not clear about what a dependent and independent variable meant so I struggled with that and asked the tutor to explain it to me, which helped and made more sense. 22.01.13 Present Proposal to tutor I presented my proposal to my tutor, and he commented on it. I was advised to narrow down my hypothesis because I wanted to find out the relationship between violent video games and aggressive, addictive behaviour. ...read more.

Mistakes corrected by English language professional. Done!!!! I noticed that my English has improved a lot. I can now understand psychology and I am taking with distance all the research which coming up in the news. Having some knowledge how to do a research, I realise that none of the researches can be 100% sure about their findings. In fact, there are more limitations than strengths. For ethical reasons some of the researches carried out in a laboratory are not reliable and we cannot generalise them with the real worlds. Overall, I think I made a lot of progress. I am able to use advance psychological language now. I understand statistics and I know how to do a research. I am very proud of myself because at the very beginning I thought I would never be able to do that. With lots of help from my tutors I managed to do it on time. But I must say that I did have to motivate myself a lot. With support from my family and friends I managed to finish my independent project. The most important lesson I have learnt has to be related to time management and being able to set small tasks and respect them. I would like to do the primary research in the future but I am aware that I have to understand statistics first and to be able to produce capable secondary research. ________________ ProposalPage ...read more.