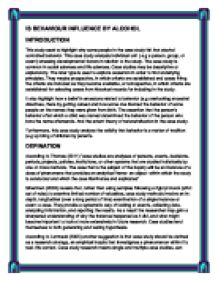 African Society. This study seeks to highlight why some people in the case study felt that alcohol controlled behavior.

IS BEHAVIOUR INFLUENCE BY ALCOHOL INTRODUCTION This study seek to highlight why some people in the case study felt that alcohol controlled behavior. This case study analysis individual unit ( e.g a person, group, or event) stressing developmental factors in relation to the study. The case study is common in social sciences and life sciences. Case studies may be descriptive or explanatory. The later type is used to explore causation in order to find underlying principles. They maybe prospective, in which criteria are established and cases fitting the criteria are included as they become available, or retrospective, in which criteria are established for selecting cases from historical records for including in the study. It also highlight how a belief in ancestors related to behavior (e.g overlooking ancestral directives, there by getting cursed and how some one blamed the behavior of some people on the names they were given from birth. The assertion that the person's behavior after which a child was named determined the behavior of the person who bore the name afterwards. And the extent theory of nature/reflection in the case study. Furthermore, this case study analyze the validity that behavior is a matter of tradition (e.g up bring of children by parents. DEFINATION According to Thomas (2011) "case studies are analyses of persons, events, decisions, periods, projects, policies, institutions, or other systems that are studied holistically by one or more methods. The case that is the subject of the inquiry will be an instance of a class of phenomena that provides an analytical frame- an object- within which the study is conducted and which the case illuminates and explicates" Silverman (2005) reveals that, rather than using samples following a rigid protocol (strict set of rules) to examine limited number of valuables, case study methods involve an in- depth, longitudinal (over a long period of time) examination of a single instance or event: a case. They provide a systematic way of looking at events, collecting data, analyzing information, and reporting the results. ...read more.

Belief In Ancestors Relates To Behavior A belief is a degree of certainty we have that something is true. Our core beliefs are often based on the beliefs of other people we unconsciously accepted as true when we were too young to decide if the person's belief really served us.(Osei, 1971). Hence, ancestral belief refers to a generalized belief about the amount of control people have over their own lives. Individuals who feel that they are very much in charge of their won destiny have an internal locus of control; those who think that events in their life are due mainly to fate/luck or powerful others have an external locus of control. Locus of control is a generalized belief, so people with an external locus can feel in control in familiar situations. (Steven L. Mcshane et al. 2005). Moreover, from the research, we have suggested that perception of people and events is organized into categories. How this is done depends partly on sensation, partly on the principles of perception, and partly on the nature of the individual. Another fact of the individual is the set of attitudes that he/she holds. Attitudes are, essentially, "feelings" towards people or things. How people feel, what they believe, what they intend to do, and whether and how they do it may all be connected, and may all be related to the process of perception. However, to try to reduce the confusion in this area over the use of words and concepts such as "feelings" and "beliefs" Fishbein (1967) put forward the following hierarchical model Beliefs What we think about people, things, relationship e.t.c Attitudes Affective responses to those people, things, relationships e.t.c Intentions Cognitive states Behavior or Action Observable events The Theory of Nature/Reflected In The Case Study The extent theory of nature/reflection in the case study refers to the personality. Personality defined as the pattern of relatively enduring ways in which a person feels, thinks and behaves. ...read more.

In European philosophy of whatever kind, the self is always envisaged as something "inside" a person, or at least as a kind of container of mental properties and powers. In African thought it is seen as "outside" subsisting in relationship to what is other, the natural and social environment. According to Ghananian historian Osei (1971) believes that Africa should chart it's future from it's indigenous cultural traditions and adopt only those aspects of no- Africa cultures that are compatible with Africa's needs, goals and circumstances namely, a scientific perspective and western educational practices. Taking a broader perspective, Thairu (1975) argues for a future of greater regional integration through educational and cultural exchanges within and between African nations. This, he says, will bring into the open pan- Africa cultural similarities, promote more widespread understanding and tolerance on the continent, and contribute to greater overall African unit philosopher Gyekye (1998) shares much of Nyasani, Makgoba and Thairu concern over Africans too often for saking Indigenous African values and their wholesale and uncritical adoption. According to Gyekye (1996) abhors the fact that ancestors continue to be of paramount importance in modern and traditional African life. He also recommends that for Africa to progress scientifically and technologically, "science should be rescued from the morass of (traditional) African religious and mystical beliefs." Gyekye insists there are main "cultural values and practices of traditional Africa that can be considered positive features of the culture and can be accommodated in the scheme of African modernity, even if they undergo some refinement and pruning to become fully harmonious with the spirit of modern culture and to function........ satisfactorily within that culture "(ibid). he discusses these traditional African values at length under the humanity, brotherhood, communalism and individualism, morality, the family economic system, chief ship and politics, human rights, knowledge and wisdom, aesthetics. CONCLUSION It is clear from the foregoing study that behavior is affected by numerous factors as discussed in this paper. Among the factors are ancestral directives, alcohol, belief, culture, emotions values, ethics, authority, rapport, hypnosis, persuasion, coercion, genetics, attitudes, situational e.t.c. ...read more.