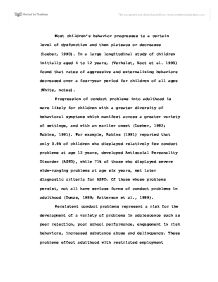 Most children's behavior progresses to a certain level of dysfunction and then plateaus or decreases (Loeber, 1990). In a large longitudinal study of children initially aged 4 to 12 years, (Verhulst, Koot et al. 1990) found that rates of aggressive and externalizing behaviors decreased over a four-year period for children of all ages (White, notes). Progression of conduct problems into adulthood is more likely for children with a greater diversity of behavioral symptoms which manifest across a greater variety of settings, and with an earlier onset (Loeber, 1982; Robins, 1991). For example, Robins (1991) reported that only 0.9% of children who displayed relatively few conduct problems at age 12 years, developed Antisocial Personality Disorder (ASPD), while 71% of those who displayed severe wide-ranging problems at age six years, met later diagnostic criteria for ASPD. Of those whose problems persist, not all have serious forms of conduct problems in adulthood (Dumas, 1989; Patterson et al., 1989). Persistent conduct problems represent a risk for the development of a variety of problems in adolescence such as peer rejection, poor school performance, engagement in risk behaviors, increased substance abuse and delinquency. ...read more.

These children are at an increased risk not only of being abused by their parents, but also for developing later problems such as poor marital, social, and occupational adjustment (U. S. Public Health Service, 2000) (White, notes, 2005). Childhood behavior problems are also a risk factor for the development of adult personality disorder, alcohol abuse, and other psychiatric disorders. In addition to personal costs, long term disruptive behavior disorders constitute a major social problem, being costly to society through early intervention in conduct problems in children demands they place on mental health services, the criminal justice system, special education programs, and other social services (White, notes, 2005). Conduct problems represent a complex, multi-determined phenomenon and a myriad of child, family and community influences have been associated with its development. The development of clinical practice guidelines is a key strategy to bring about the implementation of effective early intervention strategies as the means of achieving these better health outcomes. Scientific research has produced a large pool of data from which many professionals referred while examining individuals with childhood conduct problems. All of this has yielded an accumulation of work which examines the role of relevant risk factors in the development of early onset conduct problems. ...read more.