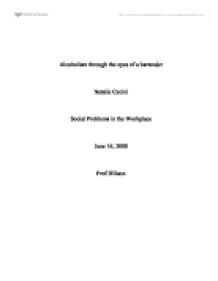 Alcoholism through the eyes of a bartender.

Alcoholism through the eyes of a bartender Natalie Cecini Social Problems in the Workplace June 16, 2008 Prof.Wilson Alcohol is a substance that affects everyone to some extent. Whether you drink too much, or have a family member or friend who abuses this drug, it somehow manages to impact the lives of almost everyone. Its effects can especially be felt in the restaurant/ bar industry by both the employees and patrons. We will discuss this aspect, along with neighborhoods with a high concentration of liquor stores and bars, and options for fixing these problems that plague us all. As a bartender, alcoholism is the social problem that affects my workplace the most. I have worked in this occupation for eight years now, and it has allowed me to work just a few nights a week and stay home with my young children the rest of the time. It has afforded my family extra money for the kids to do activities and for vacations. I consider the part time aspect in combination with the earning potential to be a blessing to my family thus far. Unfortunately, it isn't all positive when dealing with alcohol and people who abuse it. During the course of a typical shift I meet people that use alcohol to different degrees. Some just have a quick drink or two after work to wind down, while others drink to the extent that they cannot drive, or sometimes even walk or talk. ...read more.

(Men drink more than women.) (Lauer & Lauer, 2008) Too many nights of waiting up worried sick would wear on anyone. "Homes in which one or both spouses abuse alcohol have higher rates of both verbal and physical abuse." (Lauer & Lauer, 2008) Although I cannot testify as to what happens behind closed doors, I do see a lot of couples that drink in excess, either together, separately, or even if just one spouse partakes, that end up in divorce. Unfortunately, due to the emotional trauma of divorce, this ending only seems to heighten consumption among the newly single alcoholics. Although the bar that I work in is in the suburbs, it is well known that there is a higher concentration on bars and liquor stores in the inner city. This only further contributes to the crime and disparity of these urban communities. Studies have shown that public drinking is a major catalyst to crimes, both violent and property crimes, and it a major contributor to overall decline in the atmosphere in these neighborhoods. "Sixty percent of convicted homicide offenders drank before committing the offense." (Dilulio, 2008) There are law abiding citizens who have come together in many areas to try to get something done about this problem, but often the attempt is in vain. Many inner city residents have asked for something to be done, but cannot seem to get the attention of those that make and enforce the liquor laws. ...read more.

This is good news to those who feel they have no control over their disease. If they can simply make themselves take the pill every morning, it will make the decision not to drink easier when faced with immediate nausea. The social and economic benefits would be countless if the disease were ever successfully treated. It is estimated that alcohol abuse costs employers $119 billion in 1995. (NIAAA, 2008) It also costs taxpayers an astronomical amount. Health problems that develop over time because of chronic alcohol use, or babies born with fetal alcohol syndrome, can be a burden on taxpayer money. If there weren't these expenses incurred, imagine all of the other programs our government could afford to fund. The families of alcoholics often have deep rooted emotional issues that make them more likely to have substance abuse issues, and therefore more dependent on the government, and live a lifestyle that demolishes any chance of happiness. There are countless ways in which alcoholism affects us all, whether in the workplace or just in society in general. It has been shown to be detrimental in the restaurant/ bar industry to both the employees and patrons, and its overall effect can be felt in neighborhoods that are unlucky enough to have a disproportionate amount of liquor stores and bars. It takes a huge toll on families and the economy. The only hope for resolution to this problem is education for the youth and rehabilitation by whatever means necessary for those who are already under its grasp. ...read more.