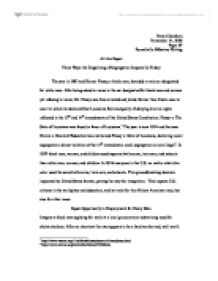 Drew Chambers November 14, 2008 Paper #3 Purcellville Effective Writing All Are Equal Three Ways the Illegalizing of Segregation Impacts Us Today The year is 1892 and Homer Plessy, a black man, boarded a train car designated for white men. After being asked to move to the car designated for black men and women yet refusing to move, Mr. Plessy was then arrested and jailed. Homer then filed a case in court in which he declared East Louisiana Railroad guilty of denying him his rights reflected in the 13th and 14th amendments of the United States Constitution. Plessy v. The State of Louisiana was found in favor of Louisiana.1 The year is now 1954 and the case Brown v. Board of Education has overturned Plessy v. State of Louisiana, declaring racial segregation a direct violation of the 14th amendment; racial segregation is now illegal2. In 1953 black men, women, and children used separate bathrooms, train cars, and schools than white men, women, and children. In 1954 everyone in the U.S. no matter what skin color used the same bathrooms, train cars, and schools. This groundbreaking decision impacted the United States forever, paving the way for integration. This impacts U.S. ...read more.

Johnson owns the WNBA's Washington Mystics and partly owns the Washington Wizards along with the Washington Capitals, being the only woman, black or white, to have stake in three national sports teams7. Sheila also co-started the first only black television network, called Black Entertainment Television, or, BET8. As you can clearly the abolishing of inhumane and vile segregation, had an incredible impact on the U.S. and the reverberations of this act can still be felt and seen all over America today. The Chance to be Educated In the 1950s and earlier, although elementary and high schools were segregated, universities were not, even still universities often required a push from the government to allow black enrollment. Although today colleges openly accept black and white applications of enrollment, as you can imagine this has also had a major impact on our society. Previously mentioned president-elect, Barack Obama, graduated from one of the oldest and prestigious schools in the U.S., Harvard Law9. President-elect Obama also graduated from Columbia University, with a degree in political science10. Also previously mentioned, Sheila Johnson, thanks to Mr. ...read more.

It was nearly impossible for men and women to raise children in a safe environment with high morals, for the reason that slums were overrun with crime and illegal drug use15. And sanitary water was a precious thing for slum-dwellers as clean, fresh water was not often accessible16. Although today people of any race from Indian to Norwegian have equal employment opportunities, the chance to become educated, and the ability to gain housing as elegant or large as any person of the white skin color. Everyone Has Equal Chance to Impact Our World No matter what race, anyone can succeed in the Land of Opportunity. Without the illegalizing of segregation Miss Rice would not have the elite and prestigious position of Secretary of State, President-elect Obama would not have received his education from Harvard University which was needed to become the President of the strongest democracy in the world, and hopeful immigrants to the U.S. would have to survive, coexist, and raise families in a place of danger and lack of water. We are a nation of all colors, all nationalities, all appearances, and all equality. The year is 2008 and every man, woman, and child, no matter what color of skin has the chance to impact the present and the future of this wonderfully created world. ...read more.