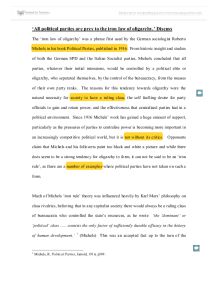 'All political parties are prey to the iron law of oligarchy.' Discuss

'All political parties are prey to the iron law of oligarchy.' Discuss The 'iron law of oligarchy' was a phrase first used by the German sociologist Roberto Michels in his book Political Parties, published in 1916. From historic insight and studies of both the German SPD and the Italian Socialist parties, Michels concluded that all parties, whatever their initial intensions, would be controlled by a political elite or oligarchy, who separated themselves, by the control of the bureaucracy, from the masses of their own party ranks. The reasons for this tendency towards oligarchy were the natural necessity for society to have a ruling class, the self fuelling desire for party officials to gain and retain power, and the effectiveness that centralised parties had in a political environment. Since 1916 Michels' work has gained a huge amount of support, particularly as the pressures of parties to centralise power is becoming more important in an increasingly competitive political world, but it is not without its critics. Opponents claim that Michels and his followers paint too black and white a picture and while there does seem to be a strong tendency for oligarchy to form, it can not be said to be an 'iron rule', as there are a number of examples where political parties have not taken on such a form. ...read more.

Thus for a firm / party to succeed there must be those that are willing to relinquish authority to others and others who are willing to accept it.7 Once these political organisation gain power the system become self perpetuating, due to two main factors; firstly the parties' political aims change with the preservation of the power becoming the primal goal above all others. This is what Michels described as the 'substitution of ends'- the official ends are abandoned and the organisation's survival becomes the real ends.8 Secondly the recently elevated party officials change as they leave the ranks of the masses and enter the political elite taking on board their issues, interests and values - they undergo their own 'substitution of ends'. This class movement is particularly significant in socialist parties where members will often come from the working classes and thus political power represents a new social base9 and often large financial incentives.10 This can lead to arrogance, with party member looking down upon the rank and file members11 and being convinced that their influence is essential for the party's survival and thus the search of further power is morally sound as it is in the party's interests.12 This is not entirely untrue, as Duverger stated 'The masses are naturally conservative; they become attached to their old leaders, they are suspicious of new faces'. ...read more.

Part of the problem is that Michels limited himself to the analysis of large / mass, capitalist parties, with national or regional aspirations. For many this is too narrower a plane to be able to make an empirical judgement about political parties as a whole, as virtually any social group can define itself as having political interests. It is also possible to point to a number of examples of parties which retain a certain aspect of democratisation, within their party ranks. Supporters of the 'iron rule' theory would counter this argument by claiming that these parties were not an exception to the rule, but just at the early stages, not having been given time to develop from its genetic phase. Like many sociological debates, it is not an argument that is close to being solved as the extent of debate far outweighs concrete evidence for either side.22 But as politics penetrates further into the people's everyday lives, politics is likely to be further polarised23 and political organisations of all kinds will have to become more centralised to compete on a level playing field with each other, giving increasing weight to the 'iron rule of oligarchy'. ...read more.

This is an excellent essay. It has a clear structure, detailed critical engagement with the literature, and a strong level of analysis. Conclusions are spelt out well and within a cohesive context. The range of reading is good and clearly thorough. I would have liked to see a bit more consideration of party competition as a factor, and some modern examples to this effect. This aside, this is a very adept answer to a difficult question.