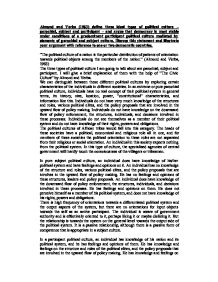 He has knowledge and feelings on the structure and roles of the political elites, and the policy proposals that are involved in the upward flow of policy making. He has knowledge and feelings on the downward flow of policy enforcement, the structures, individuals, and the decisions involved in these processes. He perceives himself as a member of his political system. He has knowledge of his rights, powers, obligations, and of strategies of access to influence. Members of this society tend to be explicitly oriented to the political system as a whole, and to political and administrative structures and processes. Individuals may like or dislike the various classes of political objects. They tend to be orientated towards an activist role of the self in the policy, through their feelings and evaluations of such a role may vary from acceptance to rejection. ...read more.