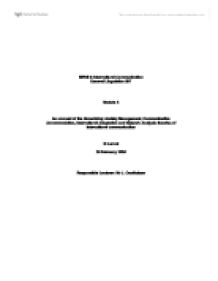 3.1 Concepts and assumptions The central hypothesis underpinning CAT is that communicators use particular communication strategies to indicate their attitudes toward each other and their respective social groups (Gudykunst 2003:172). These strategies, according to Guirdham (1999:214), involve either converging toward (convergence) or diverging away from (divergence) the verbal and non-verbal behavior of others. In the case of convergence communicator's shift their communicative behavior toward others, thereby reducing social distance (Gudykunst 2003:172). Divergence, according to Gudykunst (1999:172), involves communicators accentuating differences in their own communicative behavior to distinguish themselves from others, thereby increasing social distance. We infer that convergence and divergence is achieved by adjusting communicative traits, styles, actions and language use during the interaction. This movement toward and away from others is motivated and influenced by factors such as the social, psychological and personal characteristics that are present during communicative encounters (Guirdham 1999:214). 3.2 The nature and role of CAT communicative factors CAT describes intercultural communication with reference to four broad factor groupings. These are sociohistorical context, accommodative orientation, immediate situation and future intentions. Sociohostorical context refers to the context, based on past experience, in which the interaction is embedded. It includes communicator perspectives of intergroup relations and behavioral norms. (Gudykunst 2003:172). For example, positive previous experience with outgroup members is likely to result in accommodative behavior whilst the opposite is true in the case of negative previous experience. Accommodative orientation is, according to (Gudykunst 2003:172), about the tendency of communicators to respond to outgroup interaction in interpersonal, intergroup or a combination of interpersonal and intergroup terms. This informs communicator decisions to demonstrate accommodative behavior. Gudykunst (2003:172) adds that accommodative orientation is influenced by factors such as communicator social and personal identities, predisposition to outgroups and expectations of the encounter, such as the potential for conflict. For example, Gudykunst (2003:172) states that communicators who identify closely with their ingroup tend to view outgroup encounters from an inter-group perspective. ...read more.