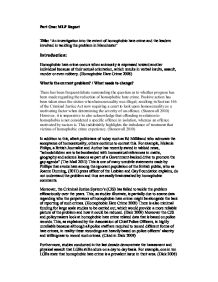 Part One: MLP Report Title: 'An investigation into the extent of homophobic hate crime and the leaders involved in tackling the problem in Manchester' Introduction: Homophobic hate crime occurs when animosity is expressed toward another individual because of their sexual orientation, which results in verbal insults, assault, murder or even robbery. (Homophobic Hare Crime 2008) What is the current problem? / What needs to change? There has been frequent debate surrounding the question as to whether progress has been made regarding the reduction of homophobic hate crime. Positive action has been taken since the sixties when homosexuality was illegal, resulting in Section 146 of the Criminal Justice Act now requiring a court to look upon homosexuality as a motivating factor when determining the severity of an offence. (Stonewall 2010) However, it is imperative to also acknowledge that offending in relation to homophobia is not considered a specific offence in isolation, whereas an offence motivated by racism is. This indubitably highlights the imbalance of treatment that victims of homophobic crime experience. (Stonewall 2010) In addition to this, albeit politicians of today such as Ed Milliband who advocate the acceptance of homosexuality, others continue to contest this. For example, Melanie Philips, a British Journalist and Author has recently stated in tabloid news, "schoolchildren are to be bombarded with homosexual references in maths, geography and science lessons as part of a Government-backed drive to promote the gay agenda" (The Mail 2011) This is one of many unsubtle statements made by Phillips that evoke hate among the ignorant population of the British public, who as Joanne Dunning, (2011) press officer of the Lesbian and Gay Foundation explains, do not understand the problem and thus are easily brainwashed by homophobic comments. Moreover, the Criminal Justice System's (CJS) has failed to tackle the problem efficaciously over the years. This, as studies illustrate, is partially due to scarce data regarding who the perpetrators of homophobic hate crime might be alongside the lack of reporting of such crimes. ...read more.

(Rivers et al 2004) The significance of doing this is recapitulated in statistical figures, which reveal that less than one quarter of LGB teachers have encouraged students to report homophobic bullying. (Rivers 2000) Alongside this, it is useful to incorporate homosexual issues within subjects such as History, Citizenship and Drama lessons as a prime example of the prejudices faced by LGBs, in the same way racism commonly is. (Rivers et al 2004) This point is reaffirmed by PC Tennant who believes, "there is a role in Secondary Schools to discuss Homosexuality as part of 'normal' social development lessons" The significance of doing this is identified in statistics, which reveal that merely two thirds of teachers address the problems surrounding homosexuality in lessons. (The Teachers Report 2007) In addition to this, another way leaders in school can help is by offering LGB students with peer support groups within schools to increase confidence, which may have deteriorated due to constant abuse. (Leather 2011) Barriers to change/challenges Charlotte Leather states, the "negative societal views about homosexuality" are mirrored by the concern that some parents express when they are informed of the Exceeding Expectations initiative, indicating that parents have a large part to play in inciting hate among their children. Thus, Exceeding Expectations can also endeavour to increase awareness by encouraging teachers, police officers, and members of the LGF to come forward to increase understanding and awareness among parents. It is also important to note that Exceeding Expectations is only aimed at Key Stage three students. This is a problem because statistics reveal that the majority of homophobia related crimes in school occur among students, eighteen and below. (The School Report 2007) Thus, there is a need for more staff to ensure a higher number of students are able to undertake the initiative to increase awareness among a larger scope of young people. However as PC Tennent states, "resources & finance are probably the biggest challenges" Moreover, funding is also required by organisations such as the LGF to run successfully. ...read more.

In addition, I believe the police play the utmost crucial role at decreasing homophobia related hate crimes as only they are capable of ensuring perpetrators are caught and punished. Hence, it is relieving and hopeful to see that Tennant and his colleagues are working hard to increase reporting and awareness in order to get one step closer to achieving justice. Due to the prevalent 'gay scene' within Manchester, there was not much problem accessing the various leaders I needed for my research, as two out of the three were situation on the famous 'Canal Street'. In addition, each leader I approached was informative and helpful. Moreover, replies to all the questions I required were given, which I used exhaustively within my report. One piece of research I would have liked to carry out was surveying the LGB community on Canal Street to determine how safe they feel in Manchester and how aware they are that help and support is available. This is because, although I found numerous useful secondary resources that I utilised alongside my primary research, many of the resources were from research conducted in 2008 and there was no specific research conducted in the City of Manchester regarding the personal opinions and experiences of the LGB community. However this was not carried out as it raised ethical concerns regarding the well-being of the participants, who naturally, would be apprehensive answering such personal questions. Moreover, it is also important to acknowledge that homophobic hate crime is still a fresh issue, which has only just gained attention from government agencies. Despite this, the Crown Prosecution Service has recently stated that it shall endeavour to work with other leaders such as the government and court to increase the accuracy, quality, and abundance of data in relation to homophobic hate crimes. (Crown Prosecution Service 2009-2010) Moreover, the CPS have also claimed to initiate a new research report in 2011, which shall be specifically designed to highlight ways that homophobic hate crimes can be reduced greatly, and what action can be undertaken to do this. ...read more.