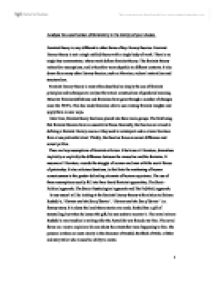 Analyse the construction of femininity in the text(s) of your choice.

Analyse the construction of femininity in the text(s) of your choice. Feminist theory is very different to other forms of key literary theories. Feminist literary theory is not a single unified theory with a single body of work. There is no single key commentator, whose work defines feminist theory. The feminist theory makes few assumptions, and is therefore very adaptable to different contexts. It also draws from many other literary theories, such as Marxism, cultural materialism and structuralism. Feminist literary theory is most often described as simply the use of feminist principles and techniques to analyse the textual constructions of gendered meaning. However feminist definitions and feminism have gone through a number of changes since the 1970's. This has made feminism able to use existing feminist insights and apply them in new ways. Over time, feminist theory has been placed into three main groups. The first being, that feminist theories have an essentialist focus. Secondly, the theories are aimed at defining a feminist literary canon or they seek to reinterpret and re-vision literature from a less patriarchal slant. Thirdly, the theories focus on sexual difference and sexual politics. There are key assumptions of feminist criticism. ...read more.

Soraya does not feature much in the novel and the part she does play is not particularly realistic. After her affair, she returns to Rashid, with no protest or even questioning. This gives Haroun the happy ending, but is quite dissatisfying. It is too constructed and not a reality of what would really happen in that situation. On the other hand, it is a possibility that Rushdie is showing her great value within the family. At the beginning of the novel, Soraya stops singing and Rashid fails to notice because he is so caught up in his storytelling: 'Rashid Khalifa was so busy making up and telling stories that he didn't notice that Soraya no longer sang; which probably made things worse.' (P.g. 16) After her departure he is unable to tell stories, this could reflect her importance to him. In this view, she is a driving force within the novel. In his novel Rushdie seems to be showing his son how women should be treated. Rushdie does give the women in the novel traditional stereotypical roles. All the men are in the army, whilst the mothers and children stay at home. Blabbermouth has to pretend to be a man to get to be a soldier, and in the end, when she is discovered, she is not allowed to keep the job anyway: ' "You're fired," he shouted at the top of his voice'. ...read more.

The novel is written to try and inform his son fatwa circumstances and the difficulties Rushdie faced. The novel is to help them bond, despite their forced separation. In the text, Haroun is not really allowed to get too close to anyone, except his father. Haroun's tentative relationship with Blabbermouth is not allowed to develop and Rushdie's narrative comes to an end before Haroun is able to accept her invitation to see her again. The emphasis is always most prominently on the relationship between father and son. There is also the issue of gendering within this novel. The stories seem to act out the social process of gendering, how children are socialised into their particular roles and their relationships as boys and girls. I think 'Haroun and the Sea of Stories' can only be considered a feminist text to a certain point. The real emphasis is on male bonding, the female characters and relationships are clearly secondary. When we try and read this novel from a feminist perspective it completely shifts our attention from the more leading and deep felt issues within it. However, Rushdie's take on feminism breaks it down as a social construct; he seems to portray his own version of femininity. He teaches his son that femininity can be positive, but oppression being felt by women is negative and we would all benefit if it was brought to an end. ...read more.