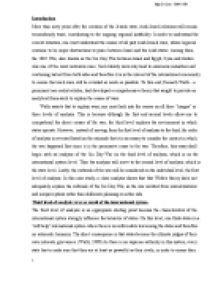 ﻿Ngo Di Lan - I6045500 Introduction More than sixty years after the creation of the Jewish state, Arab-Israeli relations still remain tremendously tense, contributing to the ongoing regional instability. In order to understand the current situation, one must understand the causes of all past Arab-Israeli wars, whose legacies continue to be major obstructions to peace between Israel and the Arab states. Among them, the 1967 War, also known as the Six Day War between Israel and Egypt, Syria and Jordan was one of the most notorious ones. Such b****y wars only lead to enormous casualties and continuing hatred from both sides and therefore it is in the interest of the international community to ensure that such wars will be avoided as much as possible. To this end, Kenneth Waltz - a prominent neo-realist scholar, had developed a comprehensive theory that sought to provide an analytical framework to explain the causes of wars. Waltz asserts that to explain wars, one must look into the causes on all three "images" or three levels of analysis. This is because although the first and second levels allow one to comprehend the direct causes of the war, the third level explores the environment in which states operate. However, instead of moving from the first level of analysis to the third, the order of analysis is reversed based on the rationale that it is necessary to consider the context in which the war happened first since it is the permissive cause to the war. ...read more.

Israel supposedly launched the war only to safeguard its security interests, but the war ended up perpetuating its security problem. Waltz's theory predicts that in an anarchical system, states would take actions to ensure its security, not making it more vulnerable like Israel did after the Six Day War and therefore this level of analysis does not fully account for the reasons why the Israeli government made the decision to go to war. Second level of analysis: war caused by internal state structure Leaders often do not make decisions solely by themselves, nor do they make decisions without any constraints or influences. These constraints and influences could be found on the second level of analysis, which examines the internal structure of the state. To understand the internal structure of a state, one may look into the type of government, its economic system, its ideology and finally, domestic problems that a state is facing. (Waltz, 1998) The internal structure of a state is an important factor influencing a country's decision to go to war because leaders may wage war simply to divert people's attention away from serious domestic problems or because there are rival groups within the leadership circle. Because Israel took a unilateral decision that led to war, to explain the outbreak of the Six Day War requires one to examine the internal organization of Israel. To explain the Israeli decision to wage war, one must examine the institutionalization of Israeli militarism, a process that began in 1936. ...read more.

However, bellicose rhetoric is different from actually being violent in nature. Evidence even proves that both sides generally tried to avoid war. While Nasser initially demanded only a partial withdrawal of the UNEF so as to avoid the need to close the Straits of Tiran and therefore not giving the Israelis a cause to go to war (Ovendale, 2004), the Israelis also consulted the U.S extensively before launching the preemptive strike. In fact, the Israeli Prime Minister even tried to reach an agreement where a naval force would be sent to the Straits of Tiran to keep it open to Israeli shipping so as to avoid war. (Ovendale, 2004) For this reason, it is unreasonable to believe that the warring parties desired war as the theory assumes. Therefore the theory fails to explain the causes of war on the first level of analysis. Conclusion The analysis has shed lights on some important matters. Firstly, Waltz's theory predicted correctly that the international system was an important background cause to the outbreak of the war as Israel had shown. The theory also makes accurate predictions as the internal structure of a state did strongly influence Israel's decision to launch the preemptive strike. The first level of analysis on the other hand, has very limited explanation power in this case study. It is problematic to include the role of the violent human nature in this conflict, and the theory completely ignored the miscalculations and misperceptions from both sides. Since Waltz's theory fails to account for the key causes of the war, it does not adequately explain the causes of the Six Day War. ...read more.