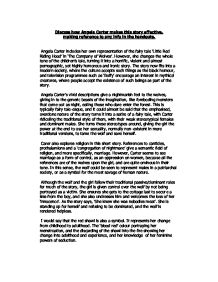 Angela Carter includes her own representation of the fairy tale 'Little Red Riding Hood' in 'The Company of Wolves'. However, she changes the whole tone of the children's tale

Discuss how Angela Carter makes this story effective, making reference to any info in the handouts. Angela Carter includes her own representation of the fairy tale 'Little Red Riding Hood' in 'The Company of Wolves'. However, she changes the whole tone of the children's tale, turning it into a horrific, violent and almost pornographic, yet highly humorous and ironic story. The story now fits into a modern society, where the culture accepts such things as the black humour, and television programmes such as 'Buffy' encourage an interest in mythical creatures, where people accept the existence of such beings as part of the story. ...read more.

Carer also explores religion in this short story. References to canticles, prothalamions and a 'congregation of nightmare' give a semantic field of religion, and more specifically, marriage. However, Carter seems to see marriage as a form of control, as an oppression on women, because all the references are of the wolves upon the girl, and are quite ominous in their tone. In this sense, the wolf could be seen to represent males in a patriarchal society, or as a symbol for the most savage of human nature. Although the wolf and the girl follow their traditional passive/dominant roles for much of the story, the girl is given control over the wolf by not being portrayed as a victim. ...read more.

It represents her change from childhood to adulthood. The 'blood red' colour portraying her menstruation, and the discarding of the shawl into the fire showing her change into adulthood and experience, and her knowledge of her feminine powers of seduction. I think that Carter includes many sexual connotations in 'The Company of Wolves' to great effect. The fact that the girl has just started her 'woman's bleeding', and later on, the boy has 'a faint trace of blood on his chin; he has been snacking on his catch' may be a repulsive forewarning of what is to come. The story also says the boy has a 'remarkable object in his pocket', which could be an innocent remark, yet Angela Carter may have consciously said this to make the story effective in the humorous sense. ...read more.