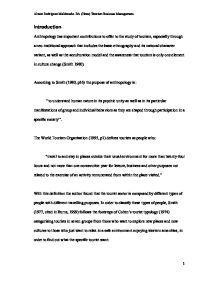 Introduction Anthropology has important contributions to offer to the study of tourism, especially through a neo-traditional approach that includes the basic ethnography and its national character variant, as well as the acculturation model and the awareness that tourism is only one element in culture change (Smith 1980). According to Smith (1980, p16) the purpose of anthropology is: ''to understand human nature in its psychic unity as well as in its particular manifestations of group and individual behaviors as they are shaped through participation in a specific society''. The World Tourism Organization (1995, p1) defines tourists as people who: "travel to and stay in places outside their usual environment for more than twenty-four hours and not more than one consecutive year for leisure, business and other purposes not related to the exercise of an activity remunerated from within the place visited." With this definition the author found that the tourist sector is composed by different types of people with different travelling purposes. In order to classify these types of people, Smith (1977, cited in Burns, 1999) follows the footsteps of Cohen's tourist typology (1974) categorising tourists in seven groups from those who want to explore new places and new cultures to those who just want to relax in a safe environment enjoying western amenities, in order to find out what the specific tourist want: Explorers: tourists who live as active participants and observers among the local people, who accept the lifestyles and norms of their hosts. ...read more.

(Gonzalez, 2010). It is also true that the tourism industry is growing by leaps and bounds as appreciated in the study 'Tourism Vision 2020' by the World Tourism Organization (1998), forecasts of expectations for the year 2020 in international tourism, will reach 1561 million people moving and travelling throughout the world as tourists. This figure will probably not be reached if we consider the economic situation of many emitter countries that are economically stagnant or in recession. One of the main issues of tourism is the fact that this activity has been practised around the four corners of the earth. Cohen (2005) states that tourism is giving rise to contradictory trends: on one hand, a post-modern decline but in which something different is being sought and, on the other, a mix of tourism and exploration which is driving new tourists to explore places never visited before such as the space or the Antarctic. In the case of the space, Crouch et al. (2009) say that space stations and hotels are planning to be constructed in order to satisfy consumer's needs, furthermore new airlines companies such as Virgin Galaxy or Space Adventures have already started sending tourists to the space, right now space tourism's impacts do not really concern to us, but in future this type of new travelling will have negative impacts even if different worlds never explored by the humanity before. With reference to Antarctic tourism, Ward (2001, p.1) ...read more.

also states that the study of tourism needs to get more information about the details of humans' lives, motivations of travel the social interaction, the host reactions to the outsiders or the local traditions that will direct tourism to specific markets. Conclusions To sum up, Anthropology of Tourism is one of these "new specialities" of academic studies. Since anthropology focuses on the study of human behaviour and relationships between cultures, there is no doubt that tourism is now seen as an element of human culture, which is to say that it is a part of some way of life and its context; a phenomenon that continually makes contact to groups of different origins and between hosts and guests of the different destinations, creating sometimes false scenes or 'back regions' of local customs in order to satisfy the desires of tourists who want to experience an 'authentic' situation in their lives. In addition, tourism has come to transform the lives of many peoples across the globe: Small Pacific Islands, Caribbean areas, or different parts of the Mediterranean have come to radically transform their economies and societies in order to adapt and take advantage of tourism and tourists who demands Western amenities across remote and native areas in the worldwide. The Anthropology of Tourism aims to study those processes of transformation and cultural impacts that tourism has generated about societies at a particular time in history which have become touristic destinations, reason that explains why the anthropology is relevant to the business of tourism. Therefore, the role of anthropology as a social science in understanding the human being and the different societies in which it is organized can be decisive. ...read more.