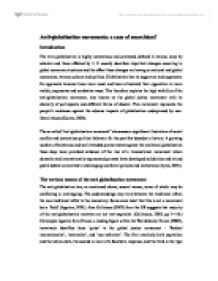 Anti-globalisation movements: a case of anarchism? Introduction The term globalisation is highly contentious and contested, defined in various ways by scholars and those affected by it. It usually describes important changes occurring to global economic structures and the effect these changes are having on national and global economies, various cultures and politics. Globalisation has its supporters and opponents. Its opponents however been more vocal and have articulated their opposition in more visible, expressive and combative ways. This therefore explains the high visibility of the anti-globalisation movement, also known as the global justice movement with its diversity of participants and different forms of dissent. This movement represents the people's resistance against the adverse impacts of globalisation underpinned by neo-liberal values (Curran, 2006). The so-called "anti-globalisation movement" showcases a significant illustration of social conflict and contentious political behavior for the past few decades in history. A growing number of boisterous and well-attended protest events against the neoliberal globalisation these days have provided evidence of the rise of a transnational movement where domestic and internationally-represented protests have developed solidarities and stirred public debate committed to challenging neoliberal policies and institutions (Ayres, 2004). The various names of the anti globalisation movement The anti-globalisation has, as mentioned above, several names, some of which may be conflicting or overlapping. The understandings may vary between the traditional leftist, the non-traditional leftist to the innovatory. Some even insist that this is not a movement but a 'field' (Aguiton, 2001). Alex Callinicos (2003) from the UK suggests that majority of the anti-globalisation activists are not anti-capitalist. (Callinicos, 2003, pp 14-16.) Christophe Aguiton from France, a leading figure within the World Social Forum (WSF), tentatively identifies three 'poles' in the global justice movement - 'Radical internationalist', 'nationalist', and 'neo-reformist'. The first overlooks both capitalism and the nation-state, the second is more of a Southern response, and the third is the type of 'global governance' tendency which is strongly present within the WSF (Rikkil� and Patom�ki 2001). ...read more.

It involves conditioning the practice and spirit of radical dissent today. This anarchism is freed from ideological conformity and there is an open exchange of ideas and traditions. However, there are many ideological anarchists who participate as proud anarchists in oppositional protest. The old anarchist schools of thought along with the new assume highly ideological positions. However, there has been a widespread embrace of anarchist ideas and strategies within oppositional politics (Curran, 2006). The core values of anarchism are autonomy, liberty, anti-statism and antiauthoritarianism. Anarchism sees hierarchy, authoritarianism and the centralisation of decision making power as detrimental to the attainment of these values. A commitment to an interaction between the means and the ends underpins anarchism's ideology. It's a libertarian and anti-authoritarian political philosophy, and has dominant allegiance on the principles of radical democracy, which is usually direct, participatory, transparent and inclusive. The list of values has another addition off late. The new anarchism has enthusiastically embraced the views of radical ecology which suggests that the environmental degradation we today is a direct impact of the destructive power of capitalism. Modern anarchists have now incorporated, the claims of ecologism, and agree that the will to power can degrade both people and nature. However, in the twenty-first century, such core values along with the various strategies to achieve them, can increasingly be interpreted and assembled in different ways. (Curran, 2006). The conceptualization of post-ideological anarchism can go further when we review other similar observations by authors the diverse elements of post-ideological anarchism are identified and probed into with greater detail in a number of illustrative case studies. Neal (1997) analyses important aspects of our postideological anarchism. He distinguishes between what he labels a small 'a' and capital A anarchism. The former refers to a less ideological strand compared to the latter. Moreover, according to him, a capitalised Anarchism is an ideology whereas the lower case anarchism is a methodology. ...read more.

However there are reasons to fear that the anti-globalisation movement may not be able to increase in the way this would require. A movement that's capable of transforming structures of power will have to involve some strong alliances, many of which will require more strong, stable and lasting forms of organisation than the ones that now exist within the anti-globalisation movement. Thus the absence of such structures may be one of the main reasons for the reluctance of many people of color to get involved in the anti-globalisation movement. Though the movement has got good relations with several trade union activists, it is difficult to imagine a strong alliance between labor and the anti-globalisation movement. An alliance of the anti-globalisation movement and labor will require major political shifts..(Epstein, 2001). For many years, radicalism has been low key in the United States, only present in several organising projects but lacking momentum and focus. The anti-globalisation movement can be seen to provide this essential focus and momentum, and therefore gives out more hope for a revival of the left than any other movement has over the last twenty years. The radical ideology prevailing amongst its core activists is representative of a soft form of anarchism. It can be viewed as something which is open to Marxist political economy, and that which prefers small-scale communities but may not necessarily rule out the need for larger ones as well. It is suspicious of structures of authority but may not necessarily deny the need for state power in some form. It is apparent that the "actually existing" anarchism has changed along with the "actually existing" Marxism. The Marxists who took part in the movements of the 60s tended to have a sharper appreciation of the relevance of social and cultural equality. So if a new paradigm of the left does emerge out of the contemporary struggle against neoliberalism and the transnational corporate order, then it is more likely to include elements of both anarchist sensibility and Marxist analysis. ...read more.