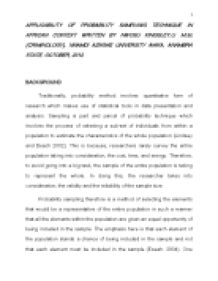 ﻿APPLICABILITY OF PROBABILITY SAMPLINIG TECHNIQUE IN AFRICAN CONTEXT WRITTEN BY NWOSU KINGSLEY.U. M.Sc (CRIMINOLOGY), NNAMDI AZIKIWE UNIVERSITY AWKA, ANAMBRA STATE. OCTOBER, 2012. BACKGROUND Traditionally, probability method involves quantitative form of research which makes use of statistical tools in data presentation and analysis. Sampling is part and parcel of probability technique which involves the process of selecting a sub-set of individuals from within a population to estimate the characteristics of the whole population (Lindsey and Beach 2002). This is because; researchers rarely survey the entire population taking into consideration, the cost, time, and energy. Therefore, to avoid going into a big task, the sample of the entire population is taking to represent the whole. In doing this, the researcher takes into consideration; the validity and the reliability of the sample size. Probability sampling therefore is a method of selecting the elements that would be a representative of the entire population in such a manner that all the elements within the population are given an equal opportunity of being included in the sample. The emphasis here is that each element of the population stands a chance of being included in the sample and not that each element must be included in the sample (Ezeah: 2004). ...read more.

The effect of this kind of problem to African research is that non-participation from any sampled element, ?biases? the final sample usually in unknown ways. The response rate describes the extent to which the final data set can be used to generalize to the entire study population; therefore, a high response rate is extremely important when results will be generalized to the larger population. The lower the response rate, the greater the sample bias which is typical of African researches using probability sampling technique (Robert 1994). In respect to the above, we shall look into some of the problems that militate against a good level of applicability of probability sampling in African context. PROBLEMS ASSOCIATED WITH PROBABILITY SAMPLING APPLICABILITY IN AFRICA 1. Sampling frame: A sampling frame is a list or set of directions for identifying the target population (Malhortra 1999:30). In other words, sampling frame consists of all the elements within a target population from which a sample could be drawn. In probability method, sampling frame is necessary using the simple random technique, which requires the availability of the sampling frame, however, this poses a lot of challenges in African studies because, in many occasions, records are scarcely available to present the researcher the required sampling frame, or in many occasions, the available ones may not be accurate reflection of the target population. ...read more.

Therefore, in such situations, it is very difficult for male researchers to uncover issues concerning women in such cultures using probability sampling technique. These and other cultural issues are prevalent within African context and hinder the quality application of the probability sampling technique. Thus, the argument in this work is not that probability sampling technique has no application capacity in Africa rather; the emphasis is that, there are many socio-cultural issues that hinder its effective application. According to Bradley (2002), the ability of researchers to understand and take into consideration, the epistemological and methodological issues in African research context, the easier it becomes for them to understand the best way to approach a study dealing with probability method. Hence, one cannot say that probability sampling has no applicability within African context; rather, the possibility of erroneous data generalizations can be inevitable due to the numerous explained environmental and cultural challenges. CONCLUSION Probability sampling method is a veritable one which has proved worthy of its reliability especially within the context of the societies that apply the ethics of its usage and will prove the same in African context if the pros and cons associated with its applicability are taking into consideration. Hence, researcher should focus attention on devising methods to overcome the cultural and attitudinal barriers of African societies. ...read more.