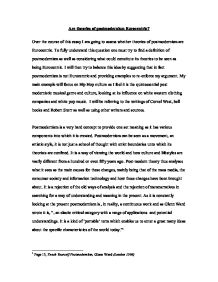 Are theories of postmodernism Eurocentric?

Are theories of postmodernism Eurocentric? Over the course of this essay I am going to assess whether theories of postmodernism are Eurocentric. To fully understand this question one must try to find a definition of postmodernism as well as considering what could constitute its theories to be seen as being Eurocentric. I will then try to balance this idea by suggesting that in fact postmodernism is not Eurocentric and providing examples to re-enforce my argument. My main example will focus on Hip Hop culture as I feel it is the quintessential post modernistic musical genre and culture, looking at its influence on white western clothing companies and white pop music. I will be referring to the writings of Cornel West, bell hooks and Robert Storr as well as using other writers and sources. Postmodernism is a very hard concept to provide one set meaning as it has various components into which it is created. Postmodernism can be seen as a movement, an artistic style, it is not just a school of thought with strict boundaries unto which its theorists are confined. It is a way of viewing the world and how culture and lifestyles are vastly different from a hundred or even fifty years ago. ...read more.

Postmodernists have claimed to have put an emphasis on the "Other", a recognition of the periphery but in the non-west it's the grand metanarratives of religion and tradition that they use to differentiate themselves from the west. Thus by creating this secular world there is a new metanarrative which has correspondence in the non-west. Post-modern theory legitimates the disintegration of the centre, it promotes a variety of voices, ignores universalism in favour of regionalism, allowing the growth of suppressed knowledge and multiple meanings of subjects. However, this creation of a new metanarrative once more places the west as the centre as it was with previous metanarratives as Nelly Richard wrote; "Postmodernism defends itself against the destabilising threat of the 'Other' by integrating it back into a framework which absorbs all differences and contradictions. The centre, though claiming to be in disintegration, still operates as a centre: filing away any divergences into a system of codes whose meanings, both semantically and territorially, it continues to administer by exclusive right."4 It is almost as if postmodernism is another way of creating a false consciousness for the "Other" as it would seem that their cultures are being represented but in fact they are only being used to satisfy the thirst of the west to consume "Otherness". ...read more.

Such a critique allows us to affirm multiple black identities, varied black experience. It also challenges colonial imperialist paradigms of black identity which represent blackness one dimensionally in ways that reinforce and sustain white supremacy."6 So, postmodernism has the ability to empower the non-white by dismissing colonial stereotypes and placing themselves in a prominent position in contemporary society and culture. It allows for the non-white to step out from being a sideshow, an 'Other' to being leaders in their fields. I feel that both arguments are relevant and I can see both have valid points. It is clear that in things such as advertising there is still an exploitation of non-white experience, a Eurocentric view but I feel that as postmodernism can be seen as continuous work then I feel it is moving away from Eurocentrism as the 'Other' cultures become more mainstream. As I pointed out with the developing language patterns of inner London and the developing influence of Hip Hop music in the pop charts but also of multiculturalism in the west I feel that the Eurocentric elements of postmodernism may be filtered out. Word Count = 2173 1 Page 13, Teach Yourself Postmodernism, Glenn Ward (London 1996) 2 Pg. 91, Black Culture and Postmodernism, Cornel West, from Remaking History (Seattle1989) 3 R. Storr, Art in America, (New York 1986) 4 N. Richard, Postmodernism and Periphery. Third Text (New York 1988) 5 6 bell hooks, Yearning, pg. 28, (Boston 1991) ...read more.