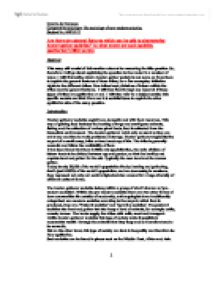 Are there any general features which can be said to characterise hunter-gather societies? To what extent are such societies egalitarian?

Are there any general features which can be said to characterise hunter-gather societies? To what extent are such societies egalitarian? (2023 words) Abstract This essay will consist of information relevant to answering the title question. So, therefore I will go about explaining the question to the reader in a number of ways; I will first define what a hunter-gather society is and move on from there to explain the general features of these tribes, for a few examples; initiation rights to the different tribes. How tribes hunt, divisions of labour within the tribes and the general features. I will then find through my research if these types of tribes are egalitarian or not. I will also refer to a subject outside this specific module and link Marx and his socialist ideas to explain the other egalitarian side of the essay question. Introduction Hunter-gatherer societies exploit non-domestic and wild food resources. This way of gaining food includes the hunting of large and small game animals, fishing and the collection of various plant foods, food is collected from the immediate environment. The hunter-gatherer catch only as much as they can eat at any one time to avoid problems of storage. ...read more.

Physical processes take place when the young men are out fending for themselves, for Example the Masai allow their hair to grow long but is shaved when they return alive, their heads are then painted with 'shining ochre' to mark their rebirth into society. The Ndembu have rituals for when the girl's reach puberty or when their breasts begin to form. They are confined to the camp area and wrapped in a blanket under a tree where the girl must lay motionless for the whole day, as this does happen in the hot country of Zambia it can be uncomfortable, even so the other tribe members perform rituals around her. Other tribes also follow these kinds of tribulations, which may even consist of mutilations of the body, for example following sexual maturity in some tribes circumcision to both male and female genitals may occur. In other tribes, incisions in the face will leave permanent scarring so that they can be recognised as being part of a certain tribe. Undergoing practises such as these are compulsory and determination in not doing so may lead to being disowned or even killed. ...read more.

is coherent for hunter-gatherer tribes. These tribes tend to have few surpluses due obviously to the fact that that they are living off the land. There is also importance of religion and ritual as I stated the rituals of the Ndembu. There seems to be lack of an economic structure as these tribes hunt and gather only as much as they need for that moment in time and so therefore have no necessity for such a structure. It has also become clear the there is also a lack of a central political system. From looking at the division of labour there defiantly seems to egalitarianism and respect amongst every one person within the tribe, maybe due to the fact that they are not as complicated as modern society westerners and live simply off the land and have no need for quarrel or indeed possession of material goods. This may not be the case for long due to the fact of the tribes being drawn into wage-labour and so therefore get a 'taste of western culture' and then like it, morals may then change and western ideas take over- this therefore may be the reason for the numbers of hunter-gather tribes being at an all time low. ?? ?? ?? ?? Camilla de Normann Comparative sociology: The sociology of non-modern societies. Student No. 04975152 ...read more.