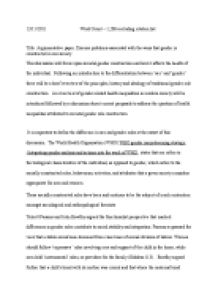 Argumentative paper. Discuss problems associated with the ways that gender is constructed in our society.

﻿12/11/2011 Word Count ? 1,206 excluding citation list. Title: Argumentative paper. Discuss problems associated with the ways that gender is constructed in our society. This discussion will focus upon societal gender construction and how it affects the health of the individual. Following an introduction to the differentiation between ?sex? and ?gender? there will be a brief overview of the principles, history and ideology of traditional gender role construction. An overview of gender related health inequalities in modern society will be introduced followed by a discussion about current proposals to address the question of health inequalities attributed to societal gender role construction. It is important to define the difference in sex and gender roles at the outset of this discussion. The World Health Organisation (WHO) WHO gender mainstreaming strategy -Integrating gender analysis and actions into the work of WHO states that sex refers to the biological characteristics of the individual, as opposed to gender, which refers to the socially constructed roles, behaviours, activities, and attributes that a given society considers appropriate for men and women. These socially constructed roles have been and continue to be the subject of much contention amongst sociological and anthropological theorists Talcott Parsons and John Bowlby argued the functionalist perspective that marked differences in gender roles contribute to social stability and integration. ...read more.

while men are encouraged from boyhood to be aggressive thus tend to indulge in riskier behaviours that may be detrimental to their health. Blurring of the lines between societal gender role constructs, sex and sexuality has provided liberation in many respects for groups of people who were before bound by traditional roles and conditioned into male or female gender roles. However, for transgendered individuals, such social constructs have been restrictive and extremely detrimental to their physical and mental well-being and despite a change towards a more well informed society, statistics show that as a group they remain at a disadvantage when attempting to access health services. The Institute of Medicine (IOM) apply the ?minority stress model? to the lesbian, gay, bisexual and transgender (LBGT) community, suggesting that these groups experience chronic stress as a result of their stigmatization within society (221). Chakraborty et al (143-148) and Mustansky et al (2426-2432) produced statistical data to suggest that individuals within the LGBT adult and adolescent community frequently presented with mental health problems in numbers that mirrored the same prevalence of mental illness in other minority groups. ...read more.