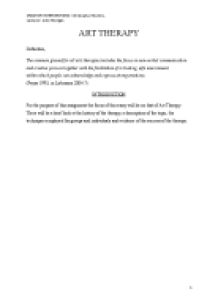 Art therapy is a mental health profession that uses the creative process of art making to improve and enhance the physical, mental, and emotional well-being of individuals

﻿CREATIVE INTERVENTIONS: Christopher Mullins, Lecturer: Jerry Morgan. ART THERAPY Definition, The common ground for all arts therapies includes the focus on non-verbal communication and creative process together with the facilitation of a trusting, safe environment within which people can acknowledge and express strong emotions. (Payne 1993, in Liebmann 2004:7). INTRODUCTION For the purpose of this assignment the focus of this essay will be on that of Art Therapy. There will be a brief look at the history of the therapy, a description of the topic, the techniques employed for groups and individuals and evidence of the success of the therapy. BRIEF HISTORY The history of Art Therapy comes from different areas, Franz Cizek an art teacher from Austria believed that children should have freedom in expression in relation to art and held an exhibition of children?s art in 1908. With the spreading of his idea he brought the exhibition to London in 1934 where Marion Richardson promoted the notion. A second strand evolved from the world of psychiatry, with the publishing of Artistry of the mentally ill, by Hans Prizhorn two psychiatrists by the names of Eric Guttmann and Francis Reitman gained inspiration to make a collection of paintings for research. The ?open studio? was pioneered by Edward Adamson who was appointed to the Netherne Hospital in Surrey, England with the direction to facilitate mentally ill patients. A third strand was derived by Adrian Hill who first coined the term ?Art Therapy? in his book art versus illness in1945. ...read more.

It is also essential in this first session for the art therapist to better grasp the framework from which the client is operating. This is also done in the assessment stage of the sessions. After establishing a rapport with the client and getting a grasp on the client's vantage point, the art therapist can introduce art therapy to the client. This is done by giving back-round information about art therapy, and answering any questions that the client may have. At this point, the therapist may suggest doing some artwork. This first piece of art that the client creates is a very important one because it sets the tone for the rest of the session. Because many people have art anxiety in these beginning sessions, it is important that the therapist makes the client feel as comfortable as possible. This could be done by saying to the client that they should not worry about artistic accomplishment, but rather self-expression. Another important aspect of this first artistic work is the reaction of the therapist to it. After this first session, it is important for the art therapist to begin developing treatment goals, as well as to reflect on what initial reactions the therapist may have after the first meeting. It is fairly hard to know when the treatment has moved from the beginning portion to the midphase, but there are a couple of key differences that do mark the midphase. First, trust between the client and therapist has been established, and the focuses of the sessions are more goals oriented. ...read more.

Overall 94% said that the therapy was helpful, 5% said that they were unsure and 1% said that it was not helpful at all Support-in terms of reducing social isolation (feeling accepted), meeting other people with similar experiences, providing a safe and stable environment, support is offered both by members of the group and also the therapist. Group participants- not willing to engage or not getting along with other members in the group, maybe transference issues?- Should be better addressed by the art therapist? Some of the drawbacks include- Therapy not being offered or not being offered early enough, the group closing or coming to an end due to funding or treatment coming to an end. Not getting along with group participants or some of them not engaging in the activities is off putting, funding it privately is too expensive and it creates co-dependency on the group and its members. ? I am 36 and only now do I believe it is possible to have a life with the normal things my friends have. I have also found that using art as a therapeutic tool has unleashed my creativity and this has enriched my life. I don't know what I would have done if I hadn't attended that first Art Therapy session. It may sound dramatic but I believe it's saved my life ...... who knows where it will take me and for the first time I am excited about life. (British Association of Art Therapists) Total word count:1,986. ...read more.