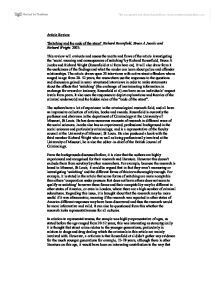 Article Review 'Snitching and the code of the street' Richard Rosenfield, Bruce A Jacobs and Richard Wright. 2003. This review will evaluate and assess the merits and flaws of the article investigating the 'social meaning and consequences of snitching' by Richard Rosenfield, Bruce A Jacobs and Richard Wright (Rosenfield et al from here on). It will also draw from it the usefulness of the findings and what the reader can learn about police and offender relationships. The article draws upon 20 interviews with active street offenders whom ranged in age from 20- 52 years, the researchers use the responses to the questions and discussion gained in semi- structured interviews in order to make statements about the effects that 'snitching' (the exchange of incriminating information in exchange for reward or leniency; Rosenfield et al) can have on an individuals' respect levels from peers. It also uses the responses to depict explanations and theories of the criminal underworld and the hidden rules of the "code of the street". ...read more.

does not harm others does not seem to qualify as snitching' however these forms and their acceptability may be different in other states of America, or even in London, where there are a high number of criminal subcultures. Regarding this issue, it is brought about that the research may be more useful if it was ethnocentric; meaning if the research was repeated in other states of America different responses may have been discovered and thus the research would be more informative and valid. It can also be questioned from this whether the research lacks representativeness for all cultures. In relation to representativeness, the sample was highly representative of ages, as stated before the age ranged from 20-52 years; this was interesting as stereotypically it is thought that street crime relates to the younger generations; particularly in relation to drugs and drug dealing which the criminals in this article are mainly involved with. However, a criticism is that Rosenfield et al didn't gather any evidence for the much younger generations for example, 13-19 years, although there is other literature on this age, it would have been an ...read more.

more, as opposed to having a list of set questions without being able to pry deeper into different aspects of the interview. Also, Rosenfield et al state that by using nicknames instead of the offenders' real names, created a 'relaxed atmosphere' and raised confidence levels. The research contributes to other literatures well as it gives real insight to the police scrutiny against offenders with real stories and experiences from offenders. However, this could also create a bias for the reader against the police because it is only one side of what happened. Although Rsenfield et al do acknowledge the interviewees could have lied to them or exaggerated their behaviour, and their focus is around the criminal, it would have been beneficial for the researchers to investigate what the Missouri police force had to say about criminals, and the idea of the police encouraging crime and violence. This would have given either supporting or created an argument against the statement made in the article that 'the police spend most of their time engaging in unjustified intrusions on the civil liberties of our respondents and others like them'. ...read more.