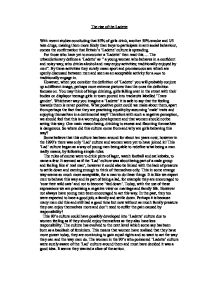 The rise of the Ladette With recent studies concluding that 85% of girls drink, another 50% smoke and 1/5 take drugs, making them more likely than boys to participate in anti social behaviour, comes the confirmation that Britain's 'Ladette' culture is spreading. For those who have yet to encounter a 'Ladette' then read this.... The urbandictionary defines a 'Ladette' as " a young woman who behaves in a confident and noisy way, who drinks alcohol and may enjoy activities; traditionally enjoyed by men". By these activities they surely mean sport and promiscuous s*x which are openly discussed between men and seen as an acceptable activity for a man to traditionally engage in. However, when you consider the definition of 'Ladette' you will probably conjure up a different image, perhaps more extreme pictures than the ones the definition focuses on. You may think of binge drinking, girls falling over in the street with their bodies on displayor teenage girls in town poured into tracksuits labelled 'Trans gender'. Whichever way you imagine a 'Ladette' it is safe to say that the feeling towards them is never positive. ...read more.

Also this was looked down upon, a woman's role was clearly defined as the housewife and child bearer. They were not taught equally to boys and in contrast had to learn to cook and clean from a young age and were also discouraged from achieving. In today's society women have to compete with men for jobs, something, which undoubtedly, puts pressure on them. Therefore behaving as the boys do makes them feel more empowered and in a position to succeed. The fact that women are rightly acknowledged as equals to men has perhaps made them feel as if they should take part in the same activities. In society people tend not to complain about a women enjoying a drink and watching football but these women can't be labelled 'Ladettes' in truth. Those women who are now behaving worse than males in the streets by drinking and flirting dangerously are causing the problem for themselves and those who have to watch it. Another worrying factor is that the culture is not only seen in pubs or in night-clubs in over 18's but the example that is being set has spread to teenage girls who drink on street corners and put themselves into compromising positions weekly. ...read more.

The girls are then realising the consequences when they never see the father again and are carrying his child. It is important to discuss that it is not just the boys who are pressurising them but their female friends too. They are adding pressure on them to follow the same direction of other girls as the culture includes all the cool things to be doing. Therefore they are pressured into acting like other and dressing like others in order to fit into the times. The question is now, how long will it last? Maybe in years to come it will have phased out, or maybe it will have progressed. Either way the culture can't be changed, it's the result of many factors and wont go away as long as it is cool. It isn't entirely possible to label someone a 'Ladette' or a 'girlie girl' in terms of personality but the two lifestyles are different and there is one I personally prefer. I can't say imitating a man is right but using equality in whatever way women can is important. That is only if the boundary isn't over stepped. ...read more.