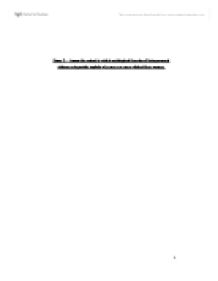 - Assess the extent to which sociological theories of interpersonal violence adequately explain why men are more violent than women.

Essay 2. - Assess the extent to which sociological theories of interpersonal violence adequately explain why men are more violent than women. Violence can mean many different things to different people. The term violence can be used precisely or vaguely and can take many different forms including physical, s****l, verbal, psychological, emotional, social, spatial and financial abuse. This makes it very difficult to find a definition of violence that works for all situations and at all times. Therefore "violence, what is meant by violence, and whether there is a notion of violence at all, are historically, socially and culturally constructed" (Hearn 1998: 15). What is named as violent in one situation may not be named as violent in another; therefore violence is both historically and culturally specific. There are many different theories as to why men are more violent than women. These theories include biological theories, which focus on hormonal patterns and aggression; psychological theories, which focus on personality types and disorders; psychoanalysis, which looks at "projection and displacement" and sociological theories, which focus on "concepts grounded in interpersonal, collective, institutional, structural or societal processes" (Hearn 1998: 17). Biological theories propose that women are naturally less violent than men. Maccoby and Jacklin (1975) describe how women display aggression and interpersonal responses which are different to that of men, which mean that situations are usually resolved without incurring violent behaviour. Biological theories of how violence 'naturally occurs' rely on explanations of differences between male and female chromosomes, hormones, genetics and territoriality. During research in the 1960s biologists found a number of genetic abnormalities in the cells of humans. As Ainsworth (2000) describes, one of these abnormalities was a condition which was labelled XYY. The name came from the discovery that a small proportion of males had an extra Y chromosome (males normally have one X and one Y chromosome, hence XY). This meant that the men with XYY had double male chromosomes, an abnormality which became nicknamed the 'supermale syndrome'. ...read more.

Hotaling and Sugarman (1986) suggest that men who are violent to their wives were traumatized as children, either through being abused themselves or through witnessing abuse of their mother by their father, again focusing on the intergenerational production of violence. Bandura (1973; 1977), a major proponent of Social Learning Theory, combined aspects of behaviourism and cognitive psychology. He argued that people learn their behaviours not only through the idea of rewards and punishments achieved through certain types of behaviour but also through observing other people's actions. By doing this "individuals can learn to anticipate the effectiveness of particular courses of action in achieving desired goals" (Jones 2000: 51; Hoffman at al 1994). To reinforce his theory Bandura conducted an experiment involving a 'Bobo doll' (Bandura 1973; 1977). In this experiment, he had some children witness an adult aggressively attacking a plastic clown called the 'Bobo doll'. The children watched a video where a 'model' aggressively beat up a doll. In order to frustrate the children, after the video they were placed in a room with attractive toys, but they could not touch them. Then the children who had watched the video and some other children who had not witnessed the violence, were led to another room where there were identical toys to those used in the Bobo video. Bandura found that the children exposed to the aggressive model were more likely to act in physically aggressive ways than those who were not exposed to the aggressive model (Ainsworth 2000; Bandura 1973; Bandura 1977; Hoffman et al 1994; Jones 2000). However there are also many criticisms of these theories as the exact process of how social learning or socialization takes place is often unclear and often represent a very simple explanation of how violence happens and is reproduced. Hearn (1998: 27) also claims that there is an "under theorization of gender" amongst the socially located theories. ...read more.

Although it is important to remember that all men are not violent all the time and it is not only men who are violent, it still remains obvious that it is men who dominate and specialize in violence. As Hearn (1998) concludes "Men remain experts in how to do violence and in the doing of violence" (Hearn 1998: 36). Violence will always be a very powerful way of showing one's masculinity. In conclusion, there are clear differences between men and women with regard to violent behaviour, however the theories behind these differences are much more complex than I originally thought. While social learning models account for some of these differences, it is unhelpful to identify one specific factor or theory which can account for violent behaviour (Hoffman et al 1994). Each theory has it strengths and weaknesses. For example, while the Social learning theory is very useful in that it highlights the important ways in which environmental influences can be translated into violent behaviour, it depends solely on the "application of a few basic principles to the complex variety of human behaviour" (Nietzel 1979 cited in Jones 2000: 66). Basically the theory relies on experiments which require participants to do specific tasks which are unlikely to be repeated anywhere outside the laboratory, in everyday life, where violence occurs. No single theory can provide all the answers, however when some of these theories are combined to provide a multi-causal explanation, it gives a much clearer picture of why men are more violent than women. These factors can include; violence in society as a whole; family socialisation; cultural norms and values; growing up in a patriarchal society; the personal attitudes of the individual; the use of substances and the effects of subcultures, and these factors may all combine to a point where violent behaviour is much more likely to occur (Ainsworth 2000). As long as we recognise the multi-causal nature of violent behaviour, sociological theories can offer us a number of valuable insights as to why men are more violent than women. ...read more.