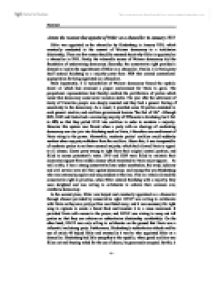 Assess the reasons that lead to the appointment of Hitler as a chancellor in January 1933.

Assess the reasons that appoint of Hitler as a chancellor in January 1933 Hitler was appointed as the chancellor by Hindenburg in January 1933, which eventually conducted to the convert of Weimar democracy to a totalitarian dictatorship. There are few reason should be assessed about why Hitler is appointed as a chancellor in 1933. Firstly, the vulnerable source of Weimar democracy laid the foundation of undermining democracy. Secondly, the conservative right provided a channel to lead to the appointment of Hitler as a chancellor. Finally, it is Nazis party itself entered Reichstag as a majority party from 1929 that created conventional appropriation for being appointed as a chancellor. Most importantly, it is vulnerability of Weimar democracy flawed the republic above all which had remained a proper environment for Nazis to grow. The proportional representation had thereby enabled the proliferation of parties which meant that democracy could never maintain stable. The year after the settlement of treaty of Versailles people was deeply resented and they had a general feeling of uncertainty to the democracy. ...read more.

It provided Nazis with access to the power, and DNVP was aiming to weep out left parties so that they can achieve an authoritarian dictatorship comfortably. On the other hand, DNVP was only willing to collaborate on the ground that Nazis was a influential and strong party. Furthermore, Hindenburg's authoritarian attitude and his use of article 48 helped Hitler and eventually it was he who appointed Hitler as a chancellor. Hindenburg had little sympathy to the republic, when grand coalition was fallen out and Bruning asked for the use of decree, he generously accepted. By this, it had gradually undermined the democratic way and rule out the importance of left and central parties, the politics of the time was composed by conspiracy rather than any of consensuses in the Reichstag. After bruning upset Hindenburg, and failed to summon a majority to support him, he was resigned. Hindenburg then appointed Papen from centre, who did not bear any resemblance to a moderate party member, but rather a conservative right figure. ...read more.

Meanwhile, they had also changed policies mainly aimed at the Versailles settlement, anti communism and anti Semitism. It became significantly popular after the outbreak of economic crisis, which translate to a huge shift within middle class. In addition, the personal role of Hitler himself also had an indispensable effect to the rise of Nazis movement. His charismatic leadership style had tempted a lot of people convicted themselves to Nazis, and his sense of opportunity and timing also helped him to catch a chance to convert Nazis to a mass movement. In conclusion, it was the vulnerability of Weimar republic which hidden deeply within the democratic system that helped Hitler rises into the power, and eventually conduct to the result of appointment of Hitler as a chancellor. Secondly, the appointment was also largely caused by the conspiracy by conservative rights, which are collaboration between DNVP and Nazis, and personal rivalry between Papen and Schleicher. Meanwhile, the own effort of Nazis itself was also inevitably important to the appointment which made them strong enough to collaborate with DNVP and take the chancellorship. ?? ?? ?? ?? Name: karl - 1 - ...read more.