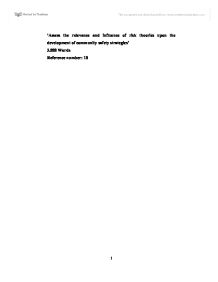 'Assess the relevance and influence of risk theories upon the development of community safety strategies' 3.888 Words Reference number: 18 Human beings from the time they are born until their death make decisions and choices which have repercussions for their lives. 'Life is about choices which have consequences' (Department of Civil Safety and Security, 2005/06: 1-5). Until the late 18th century, societies had a simple form and people could easily make choices and simultaneously feel secure, as they could see and anticipate the consequences of their decisions. However, the Industrial Revolution and its massive social and technological changes led to the transition to modern and more complex times (Gauntlett, 2001). Individuals could not control the outcome of their choices and consequently they started to take risks, which have been defined as 'a systematic way of dealing with hazards and insecurities induced and introduces by modernisation itself. Risks, as opposed to older dangers, are consequences which relate to the threatening force of modernisation and its globalisation of doubt' (Beck, 1992 as cited in Loader & Sparks, 2007: 87). People's feelings of insecurity and of living in a 'risk society' where communities are fragmented and traditional community ties less strong, urged them to seek protection and thus they solicit the reinforcement of community safety, namely 'the prevention or reduction of the social, environmental and intimidatory factors which affect people's right to live without fear of crime and which impact upon their quality of life' (Community Safety Unit, 2009). As a result, local authorities planned community safety strategies which in a broad sense lay in the assumption of corporate responsibility, in the establishment of objectives and priorities in consultation with partner agencies and the public and in the co-ordination of policies in the achievement of crime reduction (Squires, 1999). In the attempt to accomplish community safety, experts realised that the study of risk was very important and very soon risk theories emerged. ...read more.

However, the problem that rises with this approach is that it is impracticable to extract meaningful relationships on individuals or populations without perceiving the contextual and cultural structures of individuals within social groups (Langford and McDonald, 1997). Moving on cultural approaches it is important to note that culture has proved a difficult and indefinable concept to understand since it reveals different features of itself depending on the aspect from one is looking to it (Department f Civil Safety and Security, 2005/06). Over the centuries many definitions of culture have emerged. The earliest and most famous was offered by Edwin B. Tylor in 1871: 'Culture or civilisation, taken in its wide ethnographic sense is that complex whole which includes knowledge, belief, art, morals, law, custom and any other capabilities and habits acquired by man as a member of society' (Department of Criminology, 2006/07: 9-14). The basis of this line of thinking is that risk is socially constructed and risk perception between groups within society differs due to the different social characteristics and patterns of social relations (Langford and McDonald, 1997). The most prominent cultural approach which has studied risk in regard to social contexts is cultural theory. Cultural theory presents a typology of four archetypes, 'hierarchical', 'individualist', 'egalitarian' and 'fatalist', each reflecting the nature of individual response to risk (Department of Civil Safety and Security, 2005/06). More accurately, hierarchists accept levels of risk and they claim that the decisions are made by appropriately trained decision-makers. Individualists accept a high level of risk arguing that the presence of risk indicates opportunities for economic and technological development. On the other hand, egalitarians do not accept a high level of risk. They argue that others take risks in violating their own liberties. Lastly, fatalists, although they refuse to take personal risks themselves, accept the risks that the others impose on them in the belief that they can do nothing to prevent it (Department of Criminology, 2006/07). ...read more.

On the contrary, they can be seen to complement each other offering valuable insight in people's risk perception and contributing in a great degree to the development of community safety strategies (Department of Criminology, 2006/07). Thanks to these theories, the concept of policing has evolved and it has emerged the necessity of safe parks, schools, hospitals and in general of a safe community (Alexiadis, 2004). Government, local authorities and the public cooperated in transferring a combination of all risk approaches into workable community safety strategies so as the public to be and feel secure. In conclusion, risk theories are closely related to community safety strategies and they influence the development of these strategies in a great degree each one from a different perspective. There are theories of risk that propose that people are rational creatures who risk-calculating their decisions. According to this approach, people seek choices that lead to rewards and avoid whatever they can be punished for (Department of Criminology, 2006/07). Based upon this suggestion, community safety strategies can be developed by deterring potential offenders from exhibiting deviant behaviour. This can be achieved through policing, territorial reinforcement and measures in avoiding people their own victimisation (Bowers and Johnson, 2005). Cognitive, psychometric and mental models are psychological approaches which claimed that people are irrational and they act mediated from their personal desires (Department of Civil Safety and Security, 2005/06). Therefore local authorities focus more on protecting citizens from being victims of a crime. On the other hand, social and cultural perspectives suggested that risk, like any other phenomenon, is socially constructed and that people are influenced from cultural background in their decision on avoiding or taking risks (Langford and McDonald, 1997). As a result, the local government can take measures that are related to the social, cultural and economic conditions of the community. Despite their relative weaknesses, risk theories help local authorities to bring theory to practice and shape effective community safety strategies in order to guarantee security to the public in their everyday lives. ...read more.