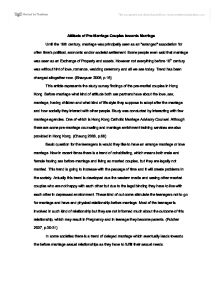 Attitude of Pre-Marriage Couples towards Marriage

Attitude of Pre-Marriage Couples towards Marriage Until the 18th century, marriage was principally seen as an "arranged" association for often time's political, economic and/or societal settlement. Some people even said that marriage was seen as an Exchange of Property and assets. However not everything before 18th century was without hint of love, romance, wedding ceremony and all we see today. Trend has been changed altogether now. (Shaoyuan 2008, p.16) This article represents the study survey findings of the pre-marital couples in Hong Kong. Before marriage what kind of attitude both s*x partners have about the love, s*x, marriage, having children and what kind of life style they suppose to adopt after the marriage and how socially they interact with other people. Study was conducted by interacting with few marriage agencies. One of which is Hong Kong Catholic Marriage Advisory Counsel. Although there are some pre-marriage counseling and marriage enrichment training services are also provided in Hong Kong. (Cheung 2008, p.88) Basic question for the teenagers is would they like to have an arrange marriage or love marriage. Now in recent times there is a trend of cohabitating, which means both male and female having s*x before marriage and living as married couples, but they are legally not married. This trend is going to increase with the passage of time and it will create problems in the society. Actually this trend is developed due the western media and seeing other married couples who are not happy with each other but due to the legal binding they have to live with each other in depressed environment. ...read more.

It would be of same age in few cases but not more than the age of male. She must have good educational background. While in some cases family background and earning power are major determinant of mate selection. (Cheung 2008, p.91) On the other hand the female like to have their future partner having high social status a calibrated by education and earning power. Females prefer the male partner to be elder than them and not look much for family background but should be similar to her family background. When respondents were asked to rank the three most desirable personal traits they picked "loyalty" and dedication to the family. A marriage further needs to be maintained and strengthens. But this phenomenon takes time so that both partners can thoroughly understand each other's problems and nature, which will help them to strengthen their relationship. There is a need of personal sacrifice to fulfill the needs of one's spouse. All the respondents acknowledge the importance of direct communication between spouses. In the end a slight majority 51% respondents rejected the traditional notion that wife should be accommodating and subservient to her husband in order to avoid conflict in their marriage. (Weeks 2001, p.69-70) In recent time rate of divorce has noticeable increased. Some people account that to time and places, for instance physical separation between spouses due to migration of husband due to his job or nature of business. Because of this distance other partner by nature trying to involve in third person to fulfill their desires. ...read more.

Women dislike having pre-marital s*x with their future spouse or their future spouse to have s*x with another person. (Pinsof 2002, p.103) So at the bottom of this article we are of view that family life education workers should adopt a open view towards pre-marital s*x and young adults have to accept pre-marital s*x in relational context. Every elder have the responsibility to guide the youngster or teenagers how to understand and manage their sexuality and importance of it in close relationship before or within the marriage. Pre-marital counseling should address the need of those marital couples that have already had s****l relationship. Helping teenager to understand the need and utilization of pre-marital s*x, under which conditions they can go for this. On the other hand family life education workers should prepare the young adults to understand their role and re-examine the gender ideology according to their attitude and family structure and their social environment. This could help the pre-marital couples to explore the patterns of shared love and understanding and mutually satisfying each other. They should have to inject the traditional value of commitment, responsibility care and understanding among teenagers, which would create peace and harmony in their married life. (Fulcher 2007, p.149) The pre-marital counseling should provide the forum of engaged couples to explore meaning of marriage to them, helping them to understand the ideology of marriage and how to cope with their spouses. They should also be provided how to cope with their parents and other family member after their married life to promote harmony in their family as well as in the society. ...read more.