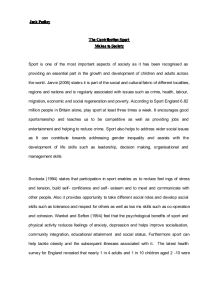 The Contribution Sport Makes to Society

Jack Pedley The Contribution Sport Makes to Society Sport is one of the most important aspects of society as it has been recognised as providing an essential part in the growth and development of children and adults across the world. Jarvie (2006) states it is part of the social and cultural fabric of different localities, regions and nations and is regularly associated with issues such as crime, health, labour, migration, economic and social regeneration and poverty. According to Sport England 6.82 million people in Britain alone, play sport at least three times a week. It encourages good sportsmanship and teaches us to be competitive as well as providing jobs and entertainment and helping to reduce crime. Sport also helps to address wider social issues as It can contribute towards addressing gender inequality and assists with the development of life skills such as leadership, decision making, organisational and management skills Svoboda (1994) states that participation in sport enables us to reduce feelings of stress and tension, build self- confidence and self- esteem and to meet and communicate with other people. ...read more.

It was found that after a 12 week programme participants that completed more than eight weeks were less likely to be reconvicted. Ian Wright former England footballer once did a television programme on when he created a five a side football tournament in prisons around the country to get convicts into sport and out of trouble for when they are to be released. Now cities and towns all over London have night time sport clubs where a huge range of sport is shown to children for them to play and get involved with. As part of the �95 million Active England programme which ran between 2005 and 2008, 665,000 people from communities suffering from high levels of deprivation had the opportunity to participate in various sporting activities. Research has found that people in poverty are half as likely as those better-off to participate in sport three times a week, be coached, be a member of a sports club, to compete or to volunteer. This is not due to lack of motivation, it is due to lack of opportunity. Sport Scotland have looked at the role of sport in regenerating urban areas. ...read more.

London is one of the most multicultural cities in the world with more than 50 ethnic communities of 10,000 or more people and where 300 different languages are used and therefore, diversity is the main reason it was chosen to host London 2012 games and they aim to recruit a diverse workforce with all sorts of job opportunities available to people currently out of work. More than 100,000 people will be paid to work on the Games in areas such as security, catering, retail, cleaning and waste. Also when world events such as The Ryder Cup and the Rugby World Cup are held, many employment windows open such as people to work the scoreboards, stewards, retail, course repairs and many more. In conclusion, sport helps encourage a healthy lifestyle, promotes inclusion, provides employment opportunities, helps to reduce crime, improves educational attainment and above all brings the nation together. The promise made by the London 2012 bid team encompasses this as it aims to 'reach young people all around the world and connect them to the inspirational power of the games so they are inspired to choose sport', We live in a world where both rich and poor people participate in sport in some way and therefore it is a huge contribution to society as a whole. (1180 words). ...read more.