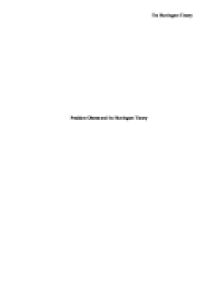 Barack Obama is against Samuel Huntingtons theory. The current president disagrees with the Huntingtons Theory of Hispanization which basically states that immigration from Mexico and Latin America is potentially destructive of original Am

President Obama and the Huntington Theory Barack Obama is against Samuel Huntington's theory. The current president disagrees with the Huntington's Theory of Hispanization which basically states that immigration from Mexico and Latin America is potentially destructive of original American political principles (Karen O'Connor, 2009). President Barack Obama sought to reach Latino voters by supporting the comprehensive Immigration Reform. He stated that a broken immigration system can only be reconstructed by leaving aside politics and offering a comprehensive solution to secure the borders, enforce the laws, and to reaffirm our tradition as a country of immigrants (Haerens, 2011). ...read more.

According to Mike Leppala, another subject of importance is that President Obama also supports the process by which undocumented immigrants currently living in the country, that have paid their taxes; although they were not allowed to work, that have had no criminal records, that have not been previously deported, and immigrants that have held a job can legalize their situation. To do so, they must be able to apply for legalization and pay the corresponding fees. ...read more.

These are some of the facts that led me to conclude that President Obama supports the Spanish colony; I understand that it can take a lot of time and dedication to see a positive change, I am from South America and I perfectly know how it feels to migrate to a different country for a better lifestyle and I am glad that the United States has a President that supports the Latin Nation. ...read more.