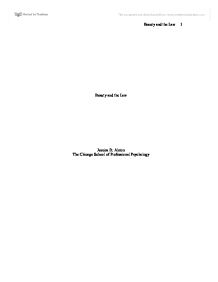 Beauty and the Law

Beauty and the Law Jessica D. Alston The Chicago School of Professional Psychology Physical Attractiveness Traits commonly associated with physically attractive people include talent, kindness, honesty, and intelligence (Aronson, 2007: Wheeler and Kim, 1997). Being physically attractive can produce what is referred to as a halo effect. A halo effect occurs when one positive or negative characteristic dominates the way a person is viewed by others (Cialdini 2001; Aronson, 2007). Cialdini (2001), a well established and published researcher on similarity and liking explains that with physical attractiveness "good-looking equals good." Physically attractive people enjoy numerous benefits throughout their lives. They are thought to be more intelligent in school, more favorably looked upon during job interviews, paid more in the workplace, and receive superior treatment within the US legal systems. ...read more.

Most people are visual and juries are made up of people. This means that juries are likely to succumb to the halo effect when it comes to the attractiveness of the offender. Offenders who are physically attractive to juries receive lenient sentences, or are found not guilty. Offenders who are physically unattractive are perceived as criminal types by juries and receive more stringent fines, bails, or are found guilty (Jackson, 1992). According to Aronson (2007) Judges are also guilty of halo bias. Attractive offenders who were found guilty of misdemeanors were given lenient fines, bails, and sentences as long as their physical attractiveness was unrelated to the crime. However, when the physical attractiveness of the offender had a direct effect on the crime the sentences were much harsher (Aronson, 2007). ...read more.

Mr. Fitzgibbons was successful in having these photos sealed (Allied Press, 2005) After two years in court, Ms. Lafave was sentenced to house arrest for the three years and on intensive probation for another seven. She's not allowed to leave home except for work and essential errands. She's a registered sex offender, who's not allowed to work with children or live within a thousand feet of a school. She wears an electronic ankle bracelet so her every movement can be tracked (Lauer, 2006). This story was followed on an international level and as a result other charges against Debra Lafave in Ocala Florida were dropped. The victims parent refused to allow the minor to testify claiming it would traumatize the victim further (Lauer, 2006). A day after charges were dropped against Lafave, Toni Lynn Woods, an elementary school teacher in West Virginia, was sentenced to 20 years in prison for sexually assaulting students. She was neither young nor attractive (Goldenberg, 2006). ...read more.