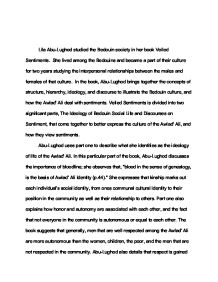 Lila Abu-Lughod studied the Bedouin society in her book Veiled Sentiments. She lived among the Bedouins and became a part of their culture for two years studying the interpersonal relationships between the males and females of that culture. In the book, Abu-Lughod brings together the concepts of structure, hierarchy, ideology, and discourse to illustrate the Bedouin culture, and how the Awlad' Ali deal with sentiments. Veiled Sentiments is divided into two significant parts, The Ideology of Bedouin Social Life and Discourses on Sentiment, that come together to better express the culture of the Awlad' Ali, and how they view sentiments. Abu-Lughod uses part one to describe what she identifies as the ideology of life of the Awlad' Ali. In this particular part of the book, Abu-Lughod discusses the importance of bloodline; she observes that, "blood in the sense of genealogy, is the basis of Awlad' Ali Identity (p.44)." She expresses that kinship marks out each individual's social identity, from ones communal cultural identity to their position in the community as well as their relationship to others. ...read more.

Men that show emotion towards a woman are seen to be weak and are shunned upon by their male peers, as well as women in the community. "Women claim, for instance, that "real men" control all their dependents and beat their wives when the wives do stupid things ( p.89)". In many cases, the Awlad' Ali women associated beatings from their husbands as a loving gesture. The author continues her research by observing the meaning of women's veils. She reveals to the reader that women begin to veil when they get married, and sexually active, as a way to cover sexual shame. Women also veil when they are embarrassed about any sexual comments made in their presence. As Abu- Lughod goes further into veiling, the reader can conclude that sexual emotions as well as sentiments aren't received openly among the community. Women that are received as honorable among the Awlad' Ali, are those that completely deny their sexuality. Once more, sexuality is definitely taboo among the Bedouin people, especially for women. In part two of Veiled Sentiments, specifically chapter five through seven, the author supports the theme of her ethnographic research by extensively discussing the ideas and practices of poetic discourse among the Awlad' Ali. ...read more.

Since writing poetry is one of my hobbies, I was intrigued by the fact that poetry was literally the only way for the Awlad' Ali to express any sentiment. Abu- Lughod in depth research not only intrigued me with its inclusion of sample Ghinnawas, but it also made many of my emotions surface. I found myself disagreeing with much of the Bedouin beliefs, especially the ideals of the honor code and their view on modesty. I was also angered by the fact that the women were extremely dependent on their husbands. The thing that bothered me the most was the way the women related beatings from their husbands to love. In my opinion, the Bedouin way of life is similar to that of fundamental Islam because of the way women veil themselves, and the social hierarchy that is present in the Bedouin society. All in all, this was definitely an interactive read for me that brought out many of my own emotions and opinions on a societies' way of life. I like the fact that the book was very informative, and written in an basic format, which made the book easier to read. ...read more.