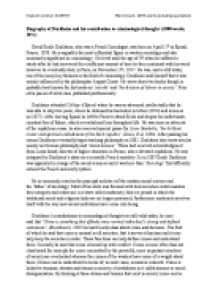 Biography of Durkheim and his contribution to criminological thought-

ï»¿Student number- S149747 Word Count- 1095 words excluding quotations Biography of Durkheim and his contribution to criminological thought- (1000 words, 30%) David Emile Durkheim, who was a French Sociologist, was born on April 15th in Epinal, France, 1858. He is arguably the most influential figure in western sociology and also immensely significant in criminology. He lived until the age of 59 when he suffered a stroke after he had recovered for a sufficient amount of time he then continued with his work however he eventually died, in Paris, on November 15th, 1917. He was, and is still today, one of the many key thinkers in the field of criminology. Durkheim said himself that it was mainly influenced by the philosopher August Comte. He wrote about ten books though is probably best known for his books on ‘suicide’ and ‘the division of labour in society’. Four extra pieces of work were published posthumously. Durkheim attended Collège d'Epinal where he was so advanced intellectually that he was able to skip two years, where he obtained his bachelors in letters (1874) and sciences in (1875). ...read more.

Crimes can be understood in terms of, in most cases, economic interests. Crime is linked to tensions, stresses and strains in society, a breakdown in it called anomie or social disorganization. By looking at these strains and tension that exist in society crime can be identified. The forth idea is that crime is very much linked to city life. For example there are cultural areas that have a higher concentration of criminal or deviant ways of life. These particular areas may have differing values, language, norms and dress code. In terms of this aspect this sort of crime can be comprehended better through the mapping of these areas. Furthermore crime can be learned in ordinary everyday situations and it can be understood by analyzing life?s histories and how people learn their meanings and values. And finally crime is due to the lack of attachments to certain groups that value law-abiding behaviour. This is when the controls and regulations that keep the society safe and secure breakdown. This aspect can be understood properly through the breakdown of these social controls. On the topic of punishment Durkheim suggests that ?Punishment is a passionate social reaction, of graduated intensity?, (Breathnach, 2002). ...read more.

‘Anomie’ is also referenced to in Durkheim ‘suicide’ book, from where it was popularized. In 1898, Durkheim created the ‘Année Sociologique’, which was the first social science journal in France. He saw this as a way to publicize his work and that of his students and other scholars that work within his sociological pattern. In 1913 Durkheim was made professor by a unanimous vote and then assumed the role of Director of Primary Education at the Ministry of Public Instruction. (Jones, R, A, 1986) Durkheim went into depression when his son, Andre, was declared missing in January of the Great War and declared dead in April 1916. Devastated by this Durkheim withdrew into a ‘ferocious silence’. As a result he buried himself in his work which ultimately led to his stroke and after months of recovering he began work again but on he eventually died on 15th November, 1917, aged just 59. (Jones, R. A, 1986) Emile Durkheim since his death, in 1917, has influenced many people with his work and theories for example Pierre Bourdieu and Marcel Mauss both French sociologists, there have been many more but the list would be too long to elaborate. Durkheim’s work will be forever remembered as his ideas were original in his time and are still taught and debated about even now. ...read more.