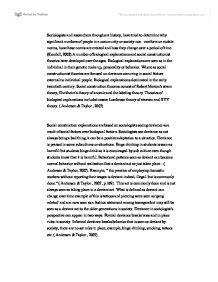 Sociologists and researchers throughout history, have tried to determine why significant numbers of people in a community or society non -conform or violate norms, how these norms are created and how they change over a period of time. (Kendall, 2008).A number of biological explanations and social constructionist theories have developed over the ages. Biological explanations are seen as in the individual in their genetic make up, personality or behavior. Where as social constructionist theories are focused on deviance occurring in social factors external to individual people. Biological explanations dominated in the early twentieth century. Social construction theories consist of Robert Merton's strain theory, Durkheim's theory of anomie and the labeling theory. Theories of biological explanations included cesare Lombroso theory of atavism and XYY theory. ( Andersen & Taylor , 2007) Social construction explanations are based on sociologists seeing deviance as a result of social factors over biological factors. Sociologists see deviance as not always being a bad thing, it can be a positive adaptation to a situation. Deviance is praised in some subcultures or situations. Binge drinking in students is seen as harmful but students binge drink as it is encouraged by sub culture even though students know that it is harmful. ...read more.

Retreatism is where people do not accept the cultural goals or achieve them. Rebellion occurs when the goals and achievement are challenged. ( Tischler, 2007). Labeling theory explains how society defines acts of deviants and places a label on people; in turn these people accept the label given to them and act accordingly. Labeling occurs when people with more power and status in a society label lower class people. If a police or a courtroom labels a person as a deviant or criminal this label sticks, as the police and court are higher up in the social status and have more power. Once a label has been placed on a person it is hard to escape it and recover back to a non-deviant identity. (Andersen & Taylor, 2007) " Once a social worker or psychirast labels a client mentally ill, that person will be treated as mentally ill, regardless of his or hers mental state. Pleas by the accused that he or she is mentally sound are typically taken as more evidence of illness. A persons anger and frustration about the label are taken as further support of diagnosis." (Andersen & Taylor, 2007, p.179). ...read more.