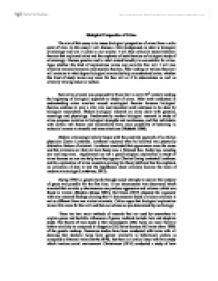 Biological Prospective of Crime The aim of this essay is to assess biological prospective of crime from a critic point of view. In this essay I will discuss a little background on what is biological criminology and role it plays in our society. I will then critically assess historical theories that explained crime and the emphasis of such theories on biological study of criminology. Discuss genetics and to what extend heredity is accountable for crime. Ague whether this kind of explanations leaves any room for free will. I will also critically examine harmonic and neurotic theories. After looking at various theories I will examine to what degree biological criminality help us understand crime, whether this kind of study leaves any room for free will or if its determinism as well as critically viewing nature or nurture. Born to be criminal was proposed by Franz Gall in early 18th century marking the beginning of biological approach to study of crime. Most work conducted in understanding crime revolves around sociological theories however biological theories continue to play a vital role and important work continues to be done by biological researchers. Modern biological research on crime deals with genetics, neurology and physiology. Fundamentally modern biological research in study of crime proposes variation in biological strengths and weaknesses, and that individuals with certain risk factors and vulnerability have more possibility of behaving in antisocial manner to stressful and tense situations (Fishbein 1996). ...read more.

A detailed study conducted concluded that neurotransmitters are initially determined by genetics but can be influenced by drugs, alcohol and lithium carbonate. The study itself failed to determine weather antisocial behaviour is a direct result of manipulation of certain chemicals that effect brain (Scerbo) Hormones are also one of widely studied topics in biological view to explain crime. The role of testosterone and its relationship with aggressive behaviour still remains to be understood. There are various different problems with study of testosterone and aggression for example instead of testosterone causing increased aggression, aggression may also cause increased level of testosterone. Social variables may also intervene in the relationship between testosterone and antisocial behaviour. From critic point of view it can be argued that although there is a strong relationship between testosterone and deviance but scale of this effect is reduced significantly when controlling social integration and reduced social integration can also result in higher deviance level (Raine, 1992). Most of hormone and crime research involves male study but not much work is conducted on female hormones and menstrual cycle. Over centuries the most fundamental issue that is raised is whether criminal behaviour is a product of nature or nurture. Theorists have always removed one or the other viewpoint from the issue. A growing debate over last two decades is if the answer lies somewhere in between nature and nurture. ...read more.

Other models such as life span development of health and illness have also proved helpful in understanding crime. Life span approach highlights many different types of advantages for advanced understanding of health related outcomes, including its ability to address sensitive and critical period issues regarding health. A life span perspective is especially appropriate even essential for the study of health because of relative health and risk for illness change throughout the lifetime with each stage of life span influenced by past events and affecting future outcomes. This kind of study accounts all major factors such as social, environmental and biological, and I believe this model will help explain causation of crime better and help us understand crime with all factors considered. Lombroso, Cesare. "introduction," to Gina Lombroso ferrara, criminal man according to the classification of Cesare Lombroso. 1911 Fishbein, Diana H. "biological Perspective in criminology," Criminology 28 (Feb 1990), 27-72. Jones 1991 http://www.mgu.har.mrc.ac.uk/publications/index.html?date=1991 David Rosenthal, "genetics theory and abnormal behaviour among twins." 1970, pp 225-36 Christiansen, K O. "seriousness of criminality and concordance among Danish twins" 1974. Walters, Glen D. "a Meta-Analysis of the Gene-Crime Relationship." Criminology (1992) Brennan, P. A, S. A Mednick, and J. Volavka, "biomedical factors in crime" 1995 Scerbo. A and A. Raine, "Neurotransmitters and antisocial behaviour: A meta-analysis" Raine, Adrian, the psychology of crime "hormones and aggression" 1992 Suzette Cote, "criminological theories, bridging the past to the future" 2002 Denno, D. W. (1998). Human biology and criminal responsibilities: free will or free ride? ...read more.