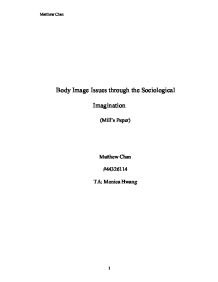 The sociological imagination could be applied to my life as well. An example could be the pursue of a good body image. As I grew up I was a very lanky skinny kid and although I didn't have any troubles then I started growing an obsession of having and creating a big masculine muscular body. As I was growing older I started to become more conscious of having a good body image such as having a muscular more masculine looking body. A lot of my friends, who originally did not really care or were not concerned about body image, started getting into going to the gym to exercise for the body they wanted. This was and still is a trend as more and more people started getting into it as this makes them think and feel that they are attractive. The trouble for me then was that I was a relatively skinny boy and the fact that there were also so many females who think having a masculine body is attractive, made me feel insecure. This made me willing to start having this goal of achieving the 'desirable' body image. I started going to the gym and started trying to build my body and as I went on with the process I became more and more conscious of my body image. ...read more.

This has led to the public having body image issues which has linked to me because my friends and because people think beauty is of having a nice body. Thereby, I started conforming to the public's idea of beauty. My personal issue with the conforming to a body image can be seen as a linkage to the public issues of beauty and the struggle for beauty. It is the satisfaction of being viewed as attractive knowing that it conforms to the public's depiction of beauty. That is what initially stemmed my desire to pursue a body better image, as this was the reason that stemmed peoples' views of what is beauty and what is not. The sociological imagination offers both a "terrible lesson" and a "magnificent one" because in a way, an individual analyzing his/her problem will feel less pressure as it could be due to issues of the society; a magnificent one. However, the individual will realize that it is the product of their environment they are in that has caused them to not being able to work where she wants, not being able to do the thing she/he wants in here way etc, her personal issues is a product of the social composition. The terrible lesson is the self-actualization of the fact the society limits an individual to do or act on things; there is a controlling force of one's freedom. ...read more.