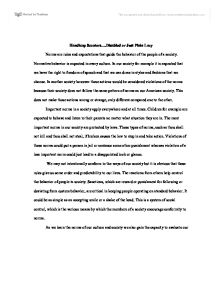 Handicap Scooters....Disabled or Just Plain Lazy Norms are rules and expectations that guide the behavior of the people of a society. Normative behavior is expected in every culture. In our society for example it is expected that we have the right to freedom of speech and that we can dress in styles and fashions that we choose. In another society however these actions would be considered violations of the norms because their society does not follow the same pattern of norms as our American society. This does not make those actions wrong or strange, only different compared one to the other. Important norms in a society apply everywhere and at all times. Children for example are expected to behave and listen to their parents no matter what situation they are in. The most important norms in our society are protected by laws. These types of norms, such as thou shall not kill and thou shall not steal, if broken causes the law to step in and take action. Violations of these norms could put a person in jail or sentence some other punishment whereas violation of a less important norm could just lead to a disappointed look or glance. We may not intentionally conform to the ways of our society but it is obvious that these rules give us some order and predictability to our lives. ...read more.

Also first starting to use the cart I did not know what I was doing and did not know how to operate the machine. With a few jolting starts, stops, and crazy turns, though, I was on a roll, literally. I moved throughout Pick N Save starting at one end in produce and slowly moving to the other side of the store. It was kind of late so the store was not busy but I hunted down the isles with the most shopping customers. I tried my best to keep a straight face while driving but I could not help laughing a little. The first people I met gave me a double take. As I motored by the coupled just glanced up quickly, then they both had to look again as I sped by. I think they were expecting to see an older person driving the cart but were shocked when they looked up to see a young healthy person. Rounding the corner of that first isle I approached my next subject. An employee was stocking the dairy shelves and as I drove closer he stopped what he was doing and had to laugh. He asked me if I was just being lazy or if I was actually hurt. Several more times throughout the store, as I zigzagged back and forth, I crossed his path and each time all he could do was laugh because he could not believe I was actually driving the cart. ...read more.

After I concluded my deviant act I left the store promptly. Engaging in a behavior that lasted no longer than 20 minutes I no longer wanted to be seen. I wanted people to forget and I hoped no one I know saw me or that anyone will remember me behaving that way. It is amazing just how acutely distressed I felt. I sensed other's disapproval of my actions even if they did not make contact with me, but also noted that I also disapproved of my actions. That internal disapproval is very powerful. I realized from as early as I can remember wanting to do well, to receive praise from my teachers, and parents and peers. I remember feeling ashamed, and embarrassed when I did something others didn't approve of. I also remember how hard I tried and still do try, to do well in my efforts. I don't think that will ever change because I am driven by an internal force and society reinforces my behavior by encouraging these attitudes. It is very obvious that social sanctions are effective at controlling behavior. Not only did I feel constrained by my internal sanctions, but people around me behaved according to the unwritten laws of social sanctions. We all play our parts unconsciously to control our environment as we have been socialized to do from birth. ...read more.