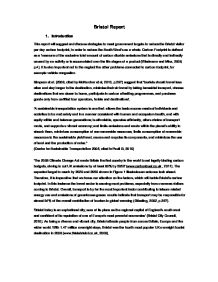 Bristol Report - Sustainable future. This report will suggest and discuss strategies to meet government targets to reduce the Bristol visitor per day carbon footprint, in order to reduce the South Wests as a whole.

Bristol Report 1. Introduction This report will suggest and discuss strategies to meet government targets to reduce the Bristol visitor per day carbon footprint, in order to reduce the South West's as a whole. Carbon Footprint is defined as a 'measure of the exclusive total amount of carbon dioxide emissions that is directly and indirectly caused by an activity or is accumulated over the life stages of a product (Wiedmann and Minx, 2008, p.4). It is also important not to the neglect the other problems connected to carbon footprint, for example vehicle congestion. Simpson et al. (2008, cited by McKercher et al, 2010, p.297) suggest that 'tourists should travel less often and stay longer in the destination, minimise their air travel by taking terrestrial transport, choose destinations that are closer to home, participate in carbon offsetting programmes, and purchase goods only from certified tour operators, hotels and destinations'. 'A sustainable transportation system is one that: allows the basic access needs of individuals and societies to be met safely and in a manner consistent with human and ecosystem health, and with equity within and between generations; is affordable, operates efficiently, offers choice of transport mode, and supports a vibrant economy; and limits emissions and waste within the planet's ability to absorb them, minimizes consumption of non-renewable resources, limits consumption of renewable resources to the sustainable yield level, reuses and recycles its components, and minimizes the use of land and the production of noise." (Centre for Sustainable Transportation 2005, cited in Pauli G, 2010) 'The 2008 Climate Change Act made Britain the first country in the world to set legally binding carbon budgets, aiming to cut UK emissions by at least 80% by 2050' (www.carbontrust.co.uk , 2011). ...read more.

A similar strategy has been implemented in Germany since the 1 January 2011 which includes all German airports, but the tax only applies on departure flights. In Germany, the air travel tax is divided into 3 different categories and the rates are based on distance to destination. 'The initial rates are (category 1) �8 to 2500km, (category 2) �25 2500-6000km, (category 3) �45 6000+ km' (www.boardingarea.com, 2011). Bristol would also introduce these 3 tax categories, but charging less, for instance �5 (category 1), �10 (category 2), �15 Pounds (category 3). This eco-tax would apply per passenger for each departure and arrival at Bristol Airport. The following numbers indicate the potential income from this strategy: In 2009 the total number for terminal and transit passengers at Bristol Airport accounted for 5,642,921 passengers, whereof 3,976,666 were EU international services (category 1) and 530,142 were other international services (category 2/3) (Bristol Airport Report, 2009, p.5). On the one hand, these air travel tax receipts would contribute as a financial source for environmental funding for instance for low carbon projects in Bristol to meet the proposed government targets in the future. Moreover, this air travel tax could potentially act as a disincentive to fly from and to Bristol Airport which would undoubtedly reduce the carbon footprint of overseas visitors to Bristol. This strategy offers a way to lessen the carbon footprint of overseas staying visitors which are causing most of the CO2 emissions (Figure 1). On the other hand, the potential consequence of this ecological air travel tax could be a decline of international tourists. This in turn could lead to a decline in foreign exchange and foreign income which could have a detrimental effect on local businesses in Bristol. ...read more.

Shopping centres in Bristol could adopt similar strategies to the Buttermark shopping centre to reduce the carbon footprint of visitors who come for shopping purposes. Conclusion In conclusion, this report suggests and discusses various strategies relating to Bristol in order to reduce the South West per visitor day carbon footprint. Bristol; being the capital of the South West of England has a unique mix of heritage and culture which creates a diverse and vibrant city. Bristol can learn a lot from other cities, e.g. Amsterdam, which has incorporated sustainable transport methods to reduce their carbon footprint. One of the main future challenges in reducing the overall carbon footprint comes from an increasing population in Britain, which is likely to put more strain on cities such as Bristol (www.statistics.gov.uk, 2010). An increasing population could for instance lead to an increase of travel, which is likely to increase the number of cars on the road. In addition, it could potentially result in more frequent international/domestic flights, as well as an increase in demand for public transportation in cities. In our opinion, the 'Bristol Cycle City' strategy would be seen as most feasible from this report. The reasoning for this is that the city has a well developed infrastructure for cycling, and it would only need enhancing slightly, for example, constructing bike garages in different areas of Bristol. This improvement can be backed through governmental funding, an integral source required for this strategy to work well. Furthermore we believe that Bristol can help the South West as a whole reach the 2020 target; a more realistic one than what is set for 2050. If everyone is willing to take part as a whole in reducing their carbon footprint and these proposed strategies come to fruition then it is likely we will reach the 2020 target, but the 2050 target looks difficult with an ever increasing population. ...read more.