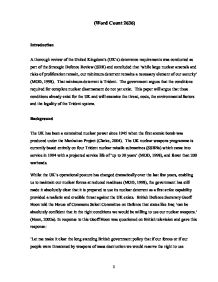 Britain's Nuclear Deterrent. The government argues that the conditions required for complete nuclear disarmament do not yet exist. This paper will argue that these conditions already exist for the UK and will examine the threat, costs, the environmental

(Word Count 2636) Introduction A thorough review of the United Kingdom's (UK's) deterrence requirements was conducted as part of the Strategic Defence Review (SDR) and concluded that 'while large nuclear arsenals and risks of proliferation remain, our minimum deterrent remains a necessary element of our security' (MOD, 1998). That minimum deterrent is Trident. The government argues that the conditions required for complete nuclear disarmament do not yet exist. This paper will argue that these conditions already exist for the UK and will examine the threat, costs, the environmental factors and the legality of the Trident system. Background The UK has been a committed nuclear power since 1945 when the first atomic b**b was produced under the Manhattan Project (Clarke, 2004). The UK nuclear weapons programme is currently based entirely on four Trident nuclear missile submarines (SSBNs) which came into service in 1994 with a projected service life of 'up to 30 years' (MOD, 1998), and fewer than 200 warheads. Whilst the UK's operational posture has changed dramatically over the last few years, enabling us to maintain our nuclear forces at reduced readiness (MOD, 1998), the government has still made it absolutely clear that it is prepared to use its nuclear deterrent as a first strike capability provided a realistic and credible threat against the UK exists. British Defence Secretary Geoff Hoon told the House of Commons Select Committee on Defence that states like Iraq 'can be absolutely confident that in the right conditions we would be willing to use our nuclear weapons.' (Hoon, 2002a). In response to this Geoff Hoon was questioned on British television and gave this response: 'Let me make it clear the long standing British ...read more.

If the government were to dispose of Trident then undoubtedly there would be large decommissioning costs involved. Arguably in the days of the MOD's SMART acquisition then decommissioning costs should be considered as part of the weapon system life-cycle cost rather than a cost of disarmament (Beach et al, 2002); either way it will have to be decommissioned at some point. A widely held view is that reasons behind keeping Trident are purely political. It is clear, however, that although all permanent members of the United Nations Security Council (UNSC) currently possess a nuclear weapons capability this is not a pre-requisite (UNSC Charter, 1945). The United Kingdom is already supporting the increase of permanent members from five to ten and this would include non-nuclear states such as Germany, Japan, Brazil and possibly an African state (MOD, 2004). The author would argue that taking the initiative and leading on nuclear disarmament could enhance the standing of the UK in the International Community and further secure its permanent seat on the UNSC. AWE employs over 3,600 personnel at Aldermaston and Burghfield and some would argue that the scrapping of Trident could have a localised detrimental effect on industry and employment. There are parallels here with the scrapping of the chemical and biological weapon development in 1956 which must be considered. Instead of making its staff redundant Porton Down re-focused the work of these facilities entirely on defensive measures, including treaty enforcement, and has made a significant contribution to reducing the international threat from chemical and biological weapons (Beach et al, 2002). ...read more.

Nuclear weapons are a danger to possess. As well as the possibility of accidents there is a possibility that they could attract pre-emptive strikes at times of great international tension (Beach et al, 2002). Finally, should the UK ever use its current nuclear deterrent it is probable that all personnel involved would be tried as war criminals - its use would be illegal in almost all circumstances. The Nuremberg Principles are fundamental to the reputation of the Royal Navy as upholders of the law and would equally apply to civil servants. Nuremberg Principle IV states: "The fact that a person acted pursuant to order of his government or of a superior does not relieve him from responsibility under international law, provided a moral choice was in fact possible for him." (Green, 1997). Although a decision on whether to replace Trident is not needed now it will be needed during this new parliament. However, from leaked reports it does seem more likely that the UK will be looking for a replacement for Trident, costing in the region of �15 Bn. It seems that the main political reasoning behind this are twofold; firstly countries such as Iran and North Korea who may be close to developing a nuclear capability pose a new threat which the government feels which must be deterred by our own nuclear capability. Secondly if the UK were to disarm, leaving the nuclear power club, then it is feared that Britain's international standing and influence would diminish (Baldwin et al, 2005). In reality, however, the UK keeping its nuclear arsenal has the effect of legitimising nuclear weapons to other, potential, nuclear countries. It is now time to consider conventional options and take the lead in nuclear disarmament to show the world it is the only way forward. ...read more.