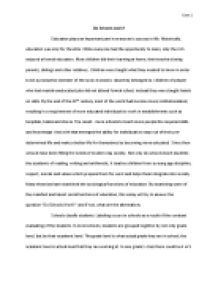 By examining some of the manifest and latent social functions of education, this essay will try to answer the question Do Schools Work? and if not, what are the alternatives.

﻿Cote Do Schools work? Education plays an important part in everyone?s success in life. Historically, education was only for the elite. While everyone had the opportunity to learn, only the rich enjoyed a formal education. Most children did their learning at home, their teachers being parents, siblings and other relatives. Children were taught what they needed to know in order to be a productive member of the socio economic class they belonged to. Children of people who had menial uneducated jobs did not attend formal school, instead they were taught hands on skills. By the end of the 20th century most of the world had become more institutionalized, resulting in a requirement of more educated individuals to work in establishments such as hospitals, banks and stores. The result...more schools to teach more people the required skills and knowledge. And with that emerged the ability for individuals to step out of their pre-determined life and make a better life for themselves by becoming more educated. Since then schools have been filling the needs of modern day society. Not only do schools teach students the academic of reading, writing and arithmetic, it teaches children from a young age discipline, respect, morals and values which prepare them for work and helps them integrate into society. Many theorists have examined the sociological functions of education. By examining some of the manifest and latent social functions of education, this essay will try to answer the question ?Do Schools Work?? and if not, what are the alternatives. ...read more.

We even see a difference in a mere 30 or 40 years. Historically classrooms were set up with the teacher?s desk in the front and rows of student?s desks facing the teacher. Power came from above and flowed downward, this is how control was carried out on students. The teacher was feared. Fear is instilled in the students and eventually no punishment is needed. Take for example ?the strap?. Years ago students were disciplined for bad behavior with physical punishment. You were sent to the Principles office and received the strap. Not a lot of students ever received the strap; however everyone behaved because of the fear. The extent of discipline usually results in no need of punishment. Michel Foucault?s work on discipline was mainly focused on prisons; however the past rigid and institutional form the schools encompassed could put them in the same category. Today things have changed. The emphasis is more on communication rather than power ( Deacon 183). When you walk into a classroom now, it differs greatly. We see desks assembled in groups. The teacher?s desk could be in the back or in the middle of the classroom, or maybe there isn?t even a teacher?s desk. This set-up is encouraging co-operative learning. The teacher has become more of an equal to the students rather than an authoritative figure. Michel Foucault talks about this when he wrote about power and the self. ?not the domination of the king in his central position....but that of his subjects in their mutual relations...[of] the multiple forms of subjugation that have a place and function within the social organism? (Olssen 21). ...read more.

The classification of students and creating conflict within the classroom can result in negative effects. Many students can be forced to either submit to authority and take on the beliefs and values of the ruling class, or be left behind. In my opinion, this is not what should be happening in schools in the 21st Century. So is there an alternative? The emergence of student based learning programs can be the answer. The article ?What Unschooling is and What it Means to Us? may be the answer to all the ?hidden? agendas of schools. Carlo Ricci describes unschooling as ?a learner-centered democratic approach to education, putting the learner?s passions and interests first? (Ricci 141). At first one may think this is homeschooling. Take the child out of the school and all social problems are solved. That is not true. Being homeschooled, you are still following a government issued outline of what you should be learning. Instead unschooling ?is putting the power over their education and life into the hands of the learner?(Ricci 151). Schools are supposed to be an extension of the home. Parents are supposed to feel safe sending their children to school. But, if your child is not part of the ?in? crowd, or your socio-economic background does not match with the population in the school, your child may be made fun of, discriminated against and simply be looked at as a outcast. This is clear evidence that schools are failing in some aspects. Children must make the conscious decision to accept the ?popular? thought in order to simply survive in the school or face the consequences. ...read more.