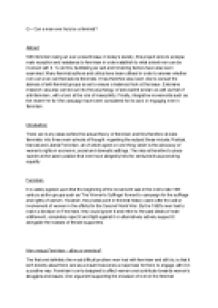 Can a man ever truly be a feminist ?

Transfer-Encoding: chunked ﻿Q ? Can a man ever truly be a feminist? Abtract With feminism being an ever present issue in today?s society, this project aims to analyse male reception and resistance to feminism in order establish to what extent men can be involved with it. To do this, facilitating as well and hindering factors have also been examined. Many feminist authors and critics have been utilised in order to answer whether men can ever call themselves feminists. It has therefore also been vital to consult the stances of anti-feminist groups so as to ensure a balanced look at the issue. Extensive research was also carried out into the psychology of ambivalent sexism as well as that of anti-feminism, with a look at the role of masculinity. Finally, integrative movements such as the recent He for She campaign have been considered for its work in engaging men in feminism. Introduction There are many ideas behind the actual theory of feminism and this therefore divides feminists into three main schools of thought regarding the subject these include; Radical, Marxist and Liberal Feminism, all of which agree on one thing which is the advocacy of women's rights in economic, social and domestic settings. The idea is therefore to place women at the same position that men have allegedly held for centuries thus promoting equality Feminism It is widely agreed upon that the beginning of the movement was in the mid to late 19th century as the groups such as 'The Women's Suffrage' formed to campaign for the suffrage and rights of women. However, the pivotal point in feminist history came after the active involvement of women in the efforts for the Second World War. By the 1960's men had to make a decision on Feminism, they could ignore it and retire to the past ideals of male entitlement, completely reject it and fight against it or alternatively actively support it alongside the masses of female supporters. ...read more.

This drastic reduction of a woman?s value is therefore what leads to the opinion that a woman simply isn?t worth equality, for many men this false perception of women is why it can be argued that they can never be a feminist. [11] Masculism Masculism is often seen as the opposite movement to feminism. Many feminists react to the types of Masculism in different ways. Those who promote gender equality are generally seen as equivalent to male feminists. However, it is more often the case that many of the beliefs surrounding Masculism point to its perceived misogynistic connotations. Most modern feminists largely opine that is the attempt of men for further dominance and superiority over women, they also believe it is merely a covert attempt to continue the subjugation of women. However activists such as Ferrell Christensen argue that if both feminism and Masculism are of the belief that both men and women equally and systematically experience prejudice and discrimination there should be no conflict between the two. He also believes that they should work together to eradicate discrimination against both sexes. In reality, however, the case is often that on both sides there exist people who believe their s*x is more discriminated than the other; thus leading to a lack progress in the arena of gender equality.[12] Most masculinists contend that separate roles for the sexes are natural. This is mirrored in society with specific roles on labour that differ between genders, prominent example is the continued lack of female soldiers on the front line, which links back to the perceived fragility of women. Moreover, the principle of natural differences in gender differences perpetuates inequality and lets the dominant continue, confident in the belief that they are different and therefore superior. Masculism has also, in part, adopted many assertions made by evolutionary psychology which states that adjustments made in prehistory lead to permanent changes in human psyche that still present themselves in the present day, which makes it impossible to adopt contemporary gender roles with equality at the forefront. ...read more.

Women must work to allow men to be part of the conversation, and for men to engage with feminism without, firstly, dominating the dialogue and secondly, resisting the threatening perception many of them have about women. Despite this, I do agree with many, that although men can never truly be feminists, they are able to assist the struggle in eliminating the patriarchy. 4554 words ________________ [1] http://www.michaelmessner.org/wp-content/uploads/2014/05/changing-men.pdf [2] Carrigan, T., R.W. Connell, and J. Lee. 1985. ‘Toward a new sociology of masculinity.’ [3] Messner, Michael A. (1998). ‘”The Limits of the "Male s*x Role": An Analysis of the Men's Liberation and Men's Rights Movement's Discourse’ [4] Harry Brod, "To Be a Man, or Not to be a Man — That Is the Feminist Question," Men Doing Feminism p. 197-212 [5] Cockburn, C. 1983. Brothers: “Male dominance and technological change.” [6] Mirsky, Seth. "Three Arguments for the Elimination of Masculinity." Men's Bodies, Men's Gods: Male Identities in a (Post-) Christian Culture, p. 27-39. [7]http://www.academia.edu/1622459/Men_and_Feminism_Some_Challenges_and_a_Partial_Response [8] Feminism Is for Everybody: Passionate Politics (2000) [9] Glick, Peter; Fiske, Susan T. (2001). "An ambivalent alliance: Hostile and benevolent sexism as complementary justifications for gender inequality p. 109 [10] stavvers.wordpress.com/2011/04/26/ambivalent-sexism-research-into-attitudes-towards-women [11] Glick, Peter; Fiske, Susan T. (2001). "An ambivalent alliance: Hostile and benevolent sexism as complementary justifications for gender inequality" [12] Christensen, Ferrell (1995). Ted Honderich, The Oxford Companion to Philosophy [13] Melissa Blais and Francis Dupuis-Déri. "Masculinism and the Antifeminist Countermovement." p. 21–39. [14]Friedan, Betty (1963). "The Happy Housewife Heroine". The Feminine Mystique. [15] Butler, Judith (1999). Gender Trouble: Feminism and the Subversion of Identity. [16] Faludi, Susan (1992). Backlash: the undeclared war against women [17] Gender and Governance in Rural Services: Insights from India, Ghana and Ethiopia [18] Snodgrass, Mary Ellen (2006). Encyclopedia of Feminist Literature [19] McDonald, Soraya Nadia (22 September 2014). "Emma Watson: Feminism too often is seen as ‘man-hating’". [20] http://site.nomas.org/roles-of-men-with-feminism-and-feminist-theory/ [21] hooks, bell. 1992. Men in Feminist Struggle The Necessary Movement, in Women Respond to the Men’s Movement [22] Jaggar, Alison. 1988. “Feminst Politics and Human Nature” ...read more.