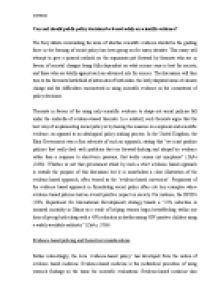 Can and should public policy decisions be based solely on scientific evidence?

﻿4095886 Can and should public policy decisions be based solely on scientific evidence? The fiery debate surrounding the issue of whether scientific evidence should be the guiding force in the framing of social policy has been going on for many decades. This essay will attempt to give a general outlook on the arguments put forward by theorists who are in favour of societal changes being fully dependent on what science says is best for society, and those who are totally against such an advanced role for science. The discussion will then turn to the favourite battlefield of advocates of both sides- the hotly disputed issue of climate change and the difficulties encountered in using scientific evidence as the cornerstone of policy decisions. Theorists in favour of the using only scientific evidence to shape out social policies fall under the umbrella of evidence-based theorists. In a nutshell, such theorists argue that the best way of implementing social policy is by basing the measure on empirical and scientific evidence, as opposed to an ideological policy making process. In the United Kingdom, the Blair Government was a firm advocate of such an approach, stating that "we must produce policies that really deal with problems that are forward-looking and shaped by evidence rather than a response to short-term pressure; that tackle causes not symptoms? (Defra (2006). Whether or not that government stood by such a strict evidence based approach is outside the purpose of this discussion but it is nonetheless a clear illustration of the evidence-based approach, often termed as the ?evidence-based movement?. Proponents of the evidence based approach in formulating social policy often cite key examples where evidence based policies had an overall positive impact on society. For instance, the DFID?s (UK's Department for International Development) strategy boasts a ?22% reduction in neonatal mortality in Ghana as a result of helping women begin breastfeeding within one hour of giving birth along with a 43% reduction in deaths among HIV positive children using a widely available antibiotic? (Defra, 2006). ...read more.

Another issue to be considered is that of public image. While scientists are respected in society and are regarded as intelligent people who don?t have political motives, policy makers are seen to be influential people with economic and political interests. There seems to be a number of conflicts between scientists and policy makers; it is safe to say that none of them are wrong or bad. It is just that one reacts to reasonable policies while the other to scientific rationality. It is also important to understand that society also heightens opportunities that can be identified as cultural rationality (Choi et al, 2005). If all these conflicting rationales could integrate, the apparent differences between scientists and policy makers will be resolved and informed decisions will be made on the correct evidence. The continuing debate over geo-engineering can be reconsidered in the discussion over science and policy laws. It is argued that the current trend to decrease the intake of fossil fuels could be disregarded by the introduction of geo-engineering. This is an easy to understand dispute, but the real issue lies in the fact that neither side understands the technological, multifaceted societal systems involved. Traditionalist views of geo-engineering regard climate change as a resolvable issue due to suitable solutions such as deploying geo-engineering technologies. The remedies put forward can only work if the problem is isolated, analysed and then solved. But for this approach to work in the current situation, climate change would need to be a problem that could, a) be solved by direct legal or technological intervention and b) be isolated from everything else. This therefore poses serious questions as climate change is not a solvable problem; it is rather a circumstance that develops from an endless network of social and built systems that reflect the aspirations of the world population to have a better way of life. Seven billion people need more food than they can afford, together with an increase of sterile water and beneficial resources for themselves and their offspring in order to conduct valuable life. ...read more.

Professional societies such as universities and research centres should set limits on the extent and circumstances of industrial and corporate sponsorship while raising awareness of the scope and magnitude of threats to science. In an ideal world, the funding of researches should be disclosed, particularly when the funder is engaged in profit-making enterprise. Scientific evidence should be strengthened by corresponding opinions from other logical disciplines: it is impractical to believe that it is the only object that politicians consider when conducting any decision. For example, scientific evidence can be adjusted alongside social research and economical programs. Peer review is very important within the scientific community but it should not be restricted to that as other factors such as the global economy have a part to play. A hypothetical example suggests that science can direct towards the positive areas of a specific medicinal theory, but it could be seen as non-economically profitable by political evaluations, and sociologically challenging. It is important for scientists to ensure that only the scientific research used to validate a specific statement is handled when dealing with policy-makers. Most importantly, the line of demarcation as to where science ends and where policy-making begins must be clearly highlighted by both scientists and policy-makers. Science is now very complex and no longer has the attribute of certainty that used to accompany it. As we have seen, science is closely entwined with politics, and it is difficult to differentiate accurate scientific evidence from ?pseudoscience?, as no superior definitions exist. Additionally, science that can be assessed by others using a scientific assumption can lead to misrepresentation and inaccuracy. Despite this, scientific analysis can be used predominantly as a thorough foundation for awareness and understanding of science. This knowledge gained by the scientific investigations can also be seen as a huge importance to policy-makers. It is important to distinguish between different types of science and whether it is beneficial to society, particularly policy-makers. In this way, it can be concluded that scientific evidence can aid public policy decisions but policies cannot be dependant, as scientific theory is never considered completely accurate. ...read more.