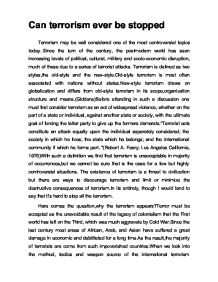 Can terrorism ever be stopped? The existence of terrorism is a threat to civilization but there are ways to discourage terrorism and limit or minimize the destructive consequences of terrorism.In its entirety, though I would tend to say that its h

Can terrorism ever be stopped Terrorism may be well considered one of the most controversial topics today. Since the turn of the century, the postmodern world has seen increasing levels of political, cultural, military and socio-economic disruption, much of these due to a series of terrorist attacks. Terrorism is defined as two styles,the old-style and the new-style.Old-style terrorism is most often associated with nations without states.New-style terrorism draws on globalization and differs from old-style terrorism in its scope,organization structure and means.(Giddens)Before attending in such a discussion one must first consider terrorism as an act of widespread violence, whether on the part of a state or individual, against another state or society, with the ultimate goal of forcing the latter party to give up the formers demands."Terrorist acts constitute an attack equally upon the individual separately considered; the society in which he lives; the state which he belongs; and the international community if which he forms part. "(Robert A. Feary; Los Angeles California, 1976)With such a definition we find that terrorism is unacceptable in majority of occurrences,but we cannot be sure that is the case for a few but highly controversial situations. ...read more.

for example, suggests that there are at least four categories of motivation among terrorists: (1) the opportunity for action, (2) the need to belong, (3) the desire for social status, and (4) the acquisition of material reward.What is the basic motivation for terrorism?It is desire for revenge to alter a wrong of injustice inflicted on another.For example, From the attacks on New York City in 2001 to the spate of car bombings in Moscow to the insurrections of the Southern Philippines,almost all the attacks caused a great number of innocent death.It is not difficult to imagine that "one of the strongest motivations behind terrorism is vengeance, particularly the desire to avenge not oneself but others. Vengeance can be specific or diffuse, but it is an obsessive drive that is a powerful motive for violence toward others, especially people thought to be responsible for injustices" (Crenshaw, 1992). What are the crucial elements in modern terrorism? There is, first of all a fascination on the media publicizing this so much. The nature and history of terrorism as we know it today is that terrorist's like to provoke the public who has the authorities that gives ...read more.

However,I also have sympathy for the societies where these terrorists are born and raised,because it is the environment that they can feel much more injustice and hostility than any other places around the world. As much as I condemn terror as an act of taking innocent lives, I sympathize with the demands of terrorists because that which drives a human to take the lives of others must be an unbearable force indeed. In the final analysis, a solution to stop all the terrorism can not be found. Reference lists Excerpts from "International Terrorism," by Robert A. Feary; Los Angeles California, 1976. From "Bargain with Terrorists? By Judith Miller, Washington corresponds of the Progressor. New York Times Magazine. From "Can Airports Be Safe Terror Bombings?" US News and World Report. 58-80. From "terrorism: Growing and increasingly dangerous," by Robert A. Feary. U.S news and World Report. 79:77-9, 1995. Gideons International.The Holy Bible (New Testament,) Gideons Press; 1999. Homer A, Jack." Hostages, Hi jacking and the Security Council;" New York, America Press,1998. Lineberry, William P.The Struggle Against Terrorism. The H.W. Wilson Company; New York, 1977. (vol.49). Tannenbaum, Jeffery A. " For World's Alienated, Often Reaps Politcal Recognition," Wall Street Journal, Dow Jones and Company, Inc, 1977. ...read more.