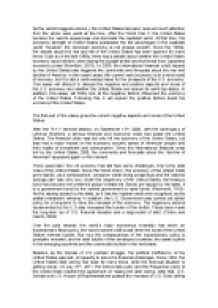 Can the United States retain its status as top nation?

The second part of the essay analyses the competitive factors of the U.S., and make an objective judgement on the national trend of the United States. In terms of one country's natural endowment and development potential, the unique natural conditions and geographical location of the U.S. is its "hard conditions" of development. Immigrant community and the talent,law spirit, innovation mechanisms, federalism, complementary of the multiculturalism and mainstream culture, social progressive improvement, the large middle class, relatively open domestic market and overseas expansion, those are the "soft environment" of the U.S. development. These hard conditions and soft environment has no change, so the U.S. Still has a huge potential for development. GDP and GDP per capital reflect the ability of a country to create wealth and the level of a country's wealth. According to the World Bank's World Development indicators, in 2010 the United States GDP occupied 23.1% of the world's total value, Japan 8%, Germany 5%, France 4%, United Kingdom 3%, Italy 3.2%, Canada 2.4%. ( The World Bank, 2010) Apparently, the advantage of the U.S. compared to other developed countries is it dominate the world GDP ratio and has a faster GDP growth. However, compared to emerging market countries, the GDP growth of the United States is slow. But the economic size and wealth level of these emerging market countries do not quite as well as the United States. Therefore, it should take a long time to overtake the United States on the scale. Additionally, the labour productivity means the output of per worker per hour. ...read more.

In the past 100 years, the innovative R&D and technological innovation is the reason for the United States can maintain the status of world economic power. After discussing both the negative and positive factors influenced the U.S. economy, it is can be seen that although the prospective for the future economy of the U.S. is not optimistic, but U.S. are still vibrant in the aspect of technology, innovating and competitiveness. There is no basis to come to a conclusion of the drop of the United States' economy only according to the developments in one or two years or one or two major events. The world status of U.S. will not sway under current economy. Reference list: BURESU, C. (2010) Statistical Abstract of the United States 2010 (Paperback). Government Printing Office. FOLBRE, N. and HEINTZ, J. (2006) Field guide to the U.S. economy: A Compact and Irreverent Guide to Economic Life in America. Perseus Books Group. FIFIELD, A. and KIRCHGAESSNER, S. (2011) Obama agrees deal to raise US debt limit [www] Available from: http://www.ft.com/cms/s/0/d3798b9c-bb7e-11e0-a7c8-00144feabdc0.html#axzz1djVff9H8 [Accessed 01/08/11] GRANITSAS, A and BOURAS, S (2011) Greek banks may face nationalization. [www] Available from: http://online.wsj.com/article/SB10001424052970203687504577001641114973320.html?KEYWORDS=European+debt+++banking+ [Accessed 27/10/11] HAMILTON, J. (2010) U.S. Economy. Gale. INTERNATIONAL MONETARY FUND (2011) IMF Statement on U.S. Agreement to Raise Debt Ceiling [www] Available from: http://www.imf.org/external/np/sec/pr/2011/pr11301.htm[Accessed 02/08/11] MARR, J. and REYNARD, C. (2010) Investing in emerging markets: The BRIC Economics and Beyond. John Wiley and Sons. RAYMOND, W.L. (1916) American and foreign investment bonds. Houghton Mifflin company. THE WORLD BANK (2010) GDP (current US$) [www] Available from: http://data.worldbank.org/indicator/NY.GDP.MKTP.CD [Accessed 2010] UNITED STATES GOVERNMENT (2010) Statistical Abstract of the United States 2010. Bernan Press. ...read more.