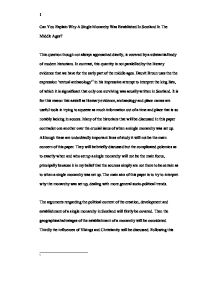 Can You Explain Why A Single Monarchy Was Established In Scotland In The Middle Ages?

Can You Explain Why A Single Monarchy Was Established In Scotland In The Middle Ages? This question though not always approached diectly, is covered by a substantial body of modern historians. In contrast, this quantity is not paralelled by the literary evidence that we have for the early part of the middle ages. Dauvit Broun uses the the expression 'textual archaeology'1 in his impressive attempt to interpret the king lists, of which it is signaificant that only one surviving was acually written in Scotland. It is for this reason that aswell as litereary evidence, archaeology and place names are useful tools in trying to squeeze as much information out of a time and place that is so notably lacking in souces. Many of the historians that will be discussed in this paper contradict one another over the crucial issue of when a single monarchy was set up. Although these are undoubtedly important lines of study it will not be the main concern of this paper. They will be briefly discussed but the complicated polemics as to exactly when and who set up a single monarchy will not be the main focus, principally because it is my belief that the sources simply are not there to be certain as to when a single monarchy was set up. The main aim of this paper is to try to interpret why the monarchy was set up, dealing with more general socio-political trends. The arguments rergarding the political context of the creation, development and establishment of a single monarchy in Scotland will firstly be covered. Then the geographical advatages of the establishment of a monarchy will be concidered. Thirdly the influences of Vikings and Christianity will be discussed. Following this the three controversal subjects of Pictish continuity, Gaelicization and existing cultural unity between the Scots and Picts. Finally, national identity will be looked at. It will be shown that it was probably a combination of all the different issues covered in this paper (some more than others) ...read more.

It is not possible to verify this source but it does not seem improbable that there links alredy existed with the Scandinavains, as they certainly did later. For the establishment of the single monarchy, the kingdom of Alba had to defend itself against the Vikings that may have directly and indirectly helped to create it in the first place. Constant�n mac Aeda in the battle of Strathern decisevly defeated the Vikings decisevly 904. Davuit Broun makes the observation that 'perhaps the Pictish language as well as Pictish identity should be regarded as one of it's greatest casualties'.9 The qulifying word 'perhaps' is crucial to this statement, without it would seem to be an overestimation of the Viking influence based on the evidence we presently have and a neclection of the other factors that led to the creation of a single monarchy. But that the Vikings acted as a catalyst appears highly probable. Christianity offers a devise of cultural unity that could have helped lead to the creation of a single monarchy. Perhaps the most important aspects of the nature of Christianity is that appears to not be rigedly confined by political boundaries in this area at this during the early middle ages. This is the clearly illustrated by the abbot of Iona, Adomn�n, in his establishment of the 'Law of the Innocents' in 697. this illustrates the Christian unity throughout Scotland and Ireland, as it was signed by fourty churchmen and fifty kings. Christianity seems at most times during this period to have offered a united Pictland and Dal Riata in a way that was later reflected politically. The Picts did have their own religious institutions before Alba was created, but as Bede wrote 'All Pictish monasteries had for a long time looked to Iona as their head'(III, 3). Cinaed's reign seems to have been crucial in the linking Christian influnce ti the creation of a single monarchy. ...read more.

There is united taste for board games in the Ireland, Dal Riata and Pictland, most notably Ballinderry-Buckquoy boards. This is explained by Lith as showing a 'common cutural heritage'.16 Litho probably goes too far in his conclusion, but it does certainly show an aspect of common cutural heritage. Another non literary based interpretation of cultutaral unity is made by Crawford when she states that 'Pictish figurative sculpture, with its classicising tendancies and the artistic kaleidoscope the book of Kells, hinting at two centuries of cross-influence among the peoples of Scotland'.17 It is a subjective interpretation and does not offer a conclusive conclusion as to the quantity of cultural unity, however it is another small incite into exactly what the nature of kingdoms of Ireland, Dal Riata and Pictland were like during this period. It was shown earlier that it appears that there was an element of cultural unity across the kingdom in terms of Christianity. If therre were also political and cultural links this might account for the successful merging of the two kingdoms of Dal Riata and Pictland. Of course, the one area that was certainly not united was language and it was Pictish that was the loser. Anderson sees the reason for this being that 'by the 840's there must have been many Picts, especially nearest to royal rank, who, whether they opposed Kenneth or supported him, were familiar With Dalrindian ways and the Irish language'.18 It may be wrong to focus specificlly on Cinaed, but links probably existed between the two kingdoms and Gaelic appears to have been the language of choice. By focussing on one language the unification of the new kingdom would have had more chance of success. The collapse of the Pictish language would have been a long term phemonen and illustrates that there were among certain people a unity that could have heped to create the kingdom. 1 2 3 4 5 6 7 8 9 10 11 12 13 14 15 16 17 18 1 ...read more.