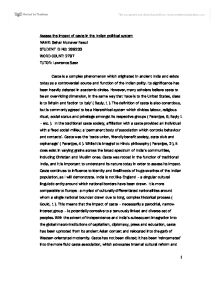 Assess the impact of caste in the Indian political system NAME: Sehar Munaver Rasul STUDENT ID NO: 289233 WORD COUNT: 2797 TUTOR: Lawrence Saez Caste is a complex phenomenon which originated in ancient India and exists today as a controversial source and function of the Indian polity. Its significance has been heavily debated in academic circles. However, many scholars believe caste to be an over-riding dimension, in the same way that 'race is to the United States, class is to Britain and faction to Italy' ( Bayly, 1 ). The definition of caste is also conentious, but is commonly agreed to be a hierarchical system which divides labour, religious ritual, social status and privelage amongst its respective groups ( Paranjpe, 5; Bayly 1 - etc. ). In the traditional caste society, affiliation with a caste provided an individual with a fixed social milieu; a 'permanent body of association which controls behaviour and contacts'. Caste was the 'trade union, friendly benefit society, state club and orphanage' ( Paranjpe, 4 ). While it is integral to Hindu philosophy ( Paranjpe, 2 ), it does exist in varying grains across the broad spectrum of India's communities, including Christian and Muslim ones. Caste was rooted in the function of traditional India, and it is important to understand its nature today in order to assess its impact. Caste continues to influence to identity and livelihoods of huge swathes of the Indian population, as I will demonstrate. India is not like England - a singular cultural linguistic entity around which national borders have been drawn. It is more comparable to Europe - a myriad of culturally differentiated nationalities around whom a single national boundar drawn due to long, complex historical process ( Gould, 1 ). ...read more.

The upper-castes have a vested interest in maintaining the socio-political status quo; the lower castes have something to gain from a changing map of opportunity. The parochialism of caste disregards the collective, left-leaning 'desires and efforts indispensable to social advance' ( PC, 997 ). In comparison, Gould remarks on the importance of caste lobbies in ensuring the rightful allocation and use of social policy. The political stalemate between socialism and capitalism in the 20th century led to a cleavage within the governmental fabric of India. Enough money was raised to finance the public economy, but the government lacked the corresponding political power required to guide their caste and class destination. This social structural dillemma was ultimately alleviated by caste lobbies that successfully voiced their socio-economic position and their requirements ( p.397 ). Beyond destabilising the goals of socialism, the parochialism of caste also impacts the basic contours of the democratic, unified nation. Paranjpe cites how in a caste society the group precedes the individual, whilst in the democratic society the individual precedes their ethnic group (1970). The massive natural association to caste weakens identification with the 'leaders, ideas and institutions' that characterise the state. Indeed, Rudolph goes so far as to say that the existence of caste destroys prospects of a modern civil society ( p.986 ). The rise of communal parties and linguistic states only seem to serve the narrow interests of caste. However, party-based caste rivalry over the socio-economic resevoir in itself is the very indication that caste does not compete with the broad, national framework; it conform conforms to it. Rudolph and Paranjpe show how caste identity has been adapted to state identity. ...read more.

In conclusion, the impact of caste in India is wide and varied. Economically, caste is hindering growth by focusing on birth rather than ability. However, with an increase in education and the policy of job reservations for lower castes, there is an increase in upward mobility. Concerning socialism, caste politics has been polarised. The lower castes appreciate a greater distribution of power into their hands, whilst many upper castes despise the breaking down of their ancient monopoly. However, whilst this may seem destabilising to the collective aim of egalitarianism, the rise of caste lobbies to represent respective socio-economic interests is infact a boon to this. It has allowed the government to adequately allocate resources and gain advice for policy aims. On a national level, the parochial nature of caste has caused some disunity; specifically with the rise of linguistic states and, as I have already mentioned, social polarisation manifest in the broad spectrum of communal parties. Whilst this does contribute to a weakening of the national identity, it is fully in line with democratic leanings. Indeed, this spells out the Indian polity as a multi-ethnic: one which is always balancing, protecting and respecting ethnic interests. In this way, caste has contributed to multicultural form of nationalism. At the same time, however, there has been a rise in Hindu nationalism in tandem with caste identification. Whilst this currently remains at the margins of the political system, it has the potential to be a threat for the secular character of India. In this way, caste has the two-fold and contradictory effects of supporting both a multicultural and monocultural state. Over-all, caste is a paramount dimension of the Indian political system, legitimising parties, influencing the economy, shaping ideals and identity politics. ...read more.