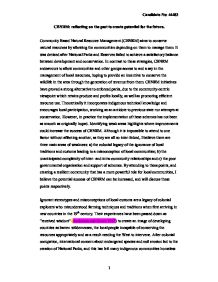 CBNRM - reflecting on the past to create potential for the future

CBNRM: reflecting on the past to create potential for the future. Community Based Natural Resource Management (CBNRM) aims to conserve natural resources by allowing the communities depending on them to manage them. It was devised after National Parks and Reserves failed to achieve a satisfactory balance between development and conservation. In contrast to these strategies, CBNRM endeavours to allow communities and other groups access to and a say in the management of local resources, hoping to provide an incentive to conserve the wildlife in the area through the generation of revenue from them. CBNRM initiatives have proved a strong alternative to enforced parks, due to the community-centric viewpoint which retains produce and profits locally, as well as promoting efficient resource use. Theoretically it incorporates indigenous technical knowledge and encourages local participation, working as an antidote to previous state run attempts at conservation. However, in practice the implementation of these schemes has not been as smooth as originally hoped. Identifying weak areas highlights where improvements could increase the success of CBNRM. Although it is impossible to attend to one factor without affecting another, as they are all so inter-linked, I believe there are three main areas of weakness: a) the colonial legacy of the ignorance of local traditions and customs leading to a misconception of local communities; b) the unanticipated complexity of inter- and intra-community relationships and c) the poor governmental organisation and support of schemes. By attending to these points, and creating a resilient community that has a more powerful role for local communities, I believe the potential success of CBNRM can be increased, and will discuss these points respectively. Ignorant stereotypes and misconceptions of local customs are a legacy of colonial explorers who misunderstood farming techniques and traditions when first arriving in new countries in the 19th century. Their experiences have been passed down as "received wisdom" (Anderson and Grove 1987) to create an image of developing countries as barren wildernesses, the local people incapable of conserving the resources appropriately and as a result needing the West to intervene. ...read more.

of a water supply, schools, cattle dips, a share of tourist revenue and profits from building projects and a new campsite location. However, five years later their promised water supply had dried up, their share of the profits was irregular and they received little tourist revenue (Lindsey in Anderson and Grove). In Uganda, the compensation promised by the government to people removed from Mgahinga National Park turned out to be an inadequate amount with which to buy new land, and the ban the utilization of resources within the park created a dire situation for those who had been relocated (Adams and Infield 2003). Projects need commitment and support from local authorities as well as national and international organisations. Unfortunately in many cases such the two described above this support is extremely lacking, leading to a depressing cycle in which more projects fail, promises of benefits go unfulfilled, negativity is increased and the distrust of authorities by local communities grows. Therefore the continued support needed for these projects is essential not only to ensure the success of the current project but also any future initiatives (Adams and Infield 2003, p. 179). Finally, the financial insecurity surrounding CBNRM is also an issue. As government does not wholly fund CBNRM projects, communities also need charitable donations to start and maintain them. However, the size of these donations can vary with changing political climate, which can also affect other forms of revenue generators such as tourism and safaris. In the 1990s when many CBNRM projects were starting out, the attention given to environmental issues worldwide was high and as a result the donation for these causes increased (Nygren 2000, p. 808). However, as interest changes and moves away from these plights onto other causes, these donations will potentially decrease, creating serious implications for CBNRM projects that will have difficulty generating the revenue necessary for successful businesses. The profit margin would decrease and as a result the incentive for taking part in the projects will decline relative to this. ...read more.

For the community, the profits from maintaining the sustainable lifestyle outweigh the disadvantage of working to conserve the wildlife. This has led to successful relationships forming between the conservancy and government, and has incorporated all the points made above regarding building conservation and flexibility into the program from the off, by working with the local community and giving them actual ownership rights over resources. As a result it has avoided the problem areas associated with other similar projects. The success of the project in Namibia demonstrates the potential of CBNRM, and illustrates the necessity for giving local communities the responsibility to make the difference in land management. By allowing self-definition of community, for example through the application process used in Namibia, organisers can be educated into the specific needs of each area, and a project with appropriate aims and incentives - available to all the demographics, not just the most obvious -can be set up. The responsibility of this falls also onto the local community to address themselves the needs of the multiple actors within, and the increased responsibility means local disputes can be resolved locally to help these problems being exacerbated. There is no longer an excuse for misconception surrounding indigenous people, and by awarding more power to local communities a system of checks and balances can be effected that will ensure the government maintains its promises and assisst in restoring positive relationships between local communities and the state. CBNRM projects that do not allow communities this power, through exclusion from decision-making processes or withholding land rights, are doomed to failure as the project participation is too low to make the potential outcomes that have been so positively theorised come to life. By planning for resilience from the off, financial uncertainty is reduced. Evidence from case studies shows that when these issues are addressed, CBNRM real potential for creating a successful relationship between conservation and development. ...read more.