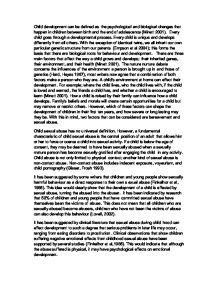 Child development can be defined as the psychological and biological changes that happen in children between birth and the end of adolescence (Minett 2001). Every child goes through a developmental process. Every child is unique and develops differently from all others. With the exception of identical twins, we all inherit our own particular genetic structure from our parents (Empson et al 2004); this forms the basis that there are biological roots for behaviour and development. There are three main factors that affect the way a child grows and develops; their inherited genes, their environment, and their health (Minett 2001). The nature nurture debate concerns the influences of the environment a person is brought up in and those of genetics (Hard, Heyes 1987), most writers now agree that a combination of both factors make a person who they are. A child's environment at home can effect their development. For example; where the child lives, who the child lives with, if the child is loved and wanted, the friends a child has, and whether a child is encouraged to learn (Minett 2001). ...read more.

Children often feel confused, frightened or distressed when the s****l abuse is taking place and may also feel physical pain. Their experience of s****l behaviour at a young age is inappropriate and traumatic. s*x becomes associated with negative feelings due to the physical and emotional pain involved. These feelings can be carried on into adulthood and may lead to a fear of s*x, touching or intimacy (Ainscough, Toon 2002). Therefore, a child's s****l, emotional and social development can be affected by the abuse they have suffered. To summarise, child s*x abuse can have an effect on all areas of children's development. Some of these effects on a child's physical and emotional development can be short term, and some longer lasting. A great deal depends on the support and love a child is given after the abuse has taken place. Bereavement can also affect the development of a child. The word bereavement is used to describe the loss that someone feels when someone close to them dies. Grief is the emotion that people go through as a consequence of the loss of someone they cared for (Childline, 2008 [online]). ...read more.

A child needs to be communicated with because they will know something is wrong due to the behaviour of the adults around them. Some adults may not tell a child the truth and may make up a story about the person that has died, but a child will find out eventually and may resent the people that lied to them (Child Bereavement Charity, 2008 [online]). To summarise, as with child s*x abuse, childhood bereavement can have an effect on many areas of childhood development. The effects on these areas greatly depend on how close a child was to the person that died, the circumstances of the death, and the way in which adults support them. In conclusion, both factors that I have considered in relation to child development are similar in some ways but very different in others. They are similar in the way that both factors can have an effect on areas of child development and how a child reacts to these factors depends a lot on the support they are given. But they are very different because bereavement is something that everyone in life has to deal with at some stage, and child s*x abuse, fortunately, is something that most people never have to contend with. ...read more.