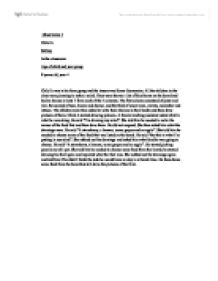 The children came into the classroom and sat down. I explained to them what they were going to do and I handed them all 500g weights to hold. Child A said "This is heavy" and started throwing the weight from one hand to the other. Child B and C copied this. I told them not to throw the weight around because somebody could get hurt. Child B and C did as I asked but child A carried on. I told child A again to stop throwing the weight. He said "but I'm weighing it in my hands." I told him that if he didn't stop then he would have to leave the classroom, he then stopped. I handed Child A the first object and asked him to write on his work sheet if he thought the object weighed more than, less than or about the same as the 500g weight. He held the weight and the object and started walking around the classroom saying "Which ones heavier, which ones heavier". I told him he needed to stay with the group; child B and C started picking up some of the other objects. I then said in a firm voice "Right, I want everyone to put everything back on the table and sit down and be quiet". The 3 children did as I asked and sat down. I explained to them that if they wanted to do the activity they needed to listen to the instructions carefully and do as they were asked; I told them I didn't need them to walk around the classroom or touch the objects when they didn't need to. I then started again, this time child A felt the weight and the object and wrote down his estimate. Child B did the same but shouted out "This one is much heavier!" I reminded him to keep his answer to himself. ...read more.