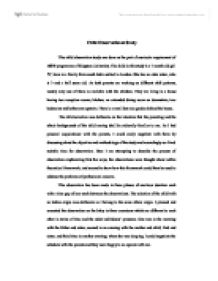 Child Observational Study This child observation study was done as the part of curricular requirement of MSW programme of Kingston University. The child in this study is a 7 month old girl 'S', born in a family from south India settled in London. She has an elder sister, who is 3 and a half years old. As both parents are working on different shift patterns, mostly only one of them is available with the children. They are living in a house having two reception rooms, kitchen, an extended dining room on downstairs, two bedrooms and bathrooms upstairs. There is a small but nice garden behind the house. The child selection was deliberate on the intention that the parenting and the ethnic backgrounds of the child rearing shall be culturally familiar to me. As I had personal acquaintance with the parents, I could easily negotiate with them by discussing about the objective and methodology of the study and accordingly we fixed suitable time for observation. Here I am attempting to describe the process of observation emphasizing first the ways, the observations were thought about within theoretical framework, and second to show how this framework could then be used to address the problems of professional concern. This observation has been made in three phases of one-hour duration each with a time gap of one week between the observations. The selection of the child with an Indian origin was deliberate as I belong to the same ethnic origin. I planned and executed the observation on the baby in three occasions which are different to each other in terms of time and the adult individuals' presence. One was in the morning with the father and sister, second in an evening with the mother and child, Dad and sister, and third time in another evening, when she was sleeping. ...read more.

When Dad and sister were around, S reduced the frequency of looking at me. When her sister called her name she stopped the body movements and looked at her. Then Dad sat down on the sofa - opposite to me, near to her, she responded positively by smiling at him and moving hands. Same time she looked at me as well. When a musical program with dance, is open in the TV, she calmed down and watched it carefully and giving looks at Dad as well. When the musical program changed, she started to look around, looking me, playing with hands and making noise etc., Developmental psychologist Judy DeLoache and her colleague Sophia Pierroutsakos have carried out several studies examining pictorial competence. Their research has shown that infants confuse pictures with objects they present up until the age of about 19 months. (Pierroutsakos & DeLoache, 2003, p. 141-156). They say that infants display the same kind of behaviour when shown videos of objects. Moreover they work even harder at trying to handle televised objects when the objects are shown in motion (Pierroutsakos & Troseth, 2003, p. 26, 183-189). However , researchers who have looked at toddler's learning of complex behaviour from video models have found that they do not learn as well from televised models as they do from models who are live.(Hayne, Herbert & Simcock, 2003, p. 6, 254-261: Schmitt & Anderson, 2002, p. 4 , 51-76). Many developmentalists suggests that the main thing babies learn from watching television is the behaviour of watching television (Boyd & Bee, 2005, p. 115). On the second time I attempted to observe the child in an evening with all four members of the family to be at home deliberately to understand whether the behaviour of the baby differs significantly when the environment change with more number of family members present with the baby. ...read more.

I concluded the last phase of the observation process also well within the stipulated time. Observation of children serves the purpose of treating them as individuals; it is focused on understanding development and it shall facilitate communication with the child. Such information shall leads towards the assessment of the child's developmental, emotional and social needs and to the assessment of the risk. A link is made with the theoretical training of social workers in understanding the development and needs of the children. The observation provided me extensive opportunity to learn from experience about an infant. The process helped me learn how family members behave to and experience the crucial events of the infant's life and the quality and nature of relationship that develop between them. Although focused on the infant, the care giving behaviour of the parents also could be observed. It is primarily considered as the context for child's behaviour. The major limitations I felt with respect to the present investigation are the unwillingness of the parents to let the infant freely lying on the floor thereby disenabling me for a more natural observation and the circumstantial pressures that constrained me to leave my original plan to observe the child when sleeping and coming out of sleep. In conclusion, I can safely state that the sensorimotor development of S is normal and adequate. She become more aware of individuals and events outside her own body and makes the events happen again in a kind of trial and error learning. Beginning understanding of the "object concept" as suggested by Inhelder and Piaget (1958) could also be detected. Globally in general, and India in particular, it is the family environment that have profound significance and impact on the child's growth. Factors within the family that may influence the ability to respond to the child's developmental needs include the parents' own experience on childhood and parenting style. ...read more.