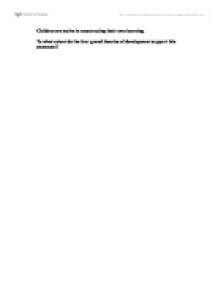 Children are active in constructing their own learning. To what extent do the four grand theories of development support this statement?

Children are active in constructing their own learning. To what extent do the four grand theories of development support this statement? To say that children are active in constructing their own learning, is to propose that they choose information and have the ability to form their own ideas about the world and the environment. This essay aims to clarify the key features of the four grand theories (behaviourism. social learning theory, constructivism and social constructivism) and their relationship with regards to children's learning. The four theories will then be compared and contrasted to see to what extent they support the statement that children learn in an active way. It should be noted however that the theories focus on different (such as behavioural, social, cognitive, emotional and socio-cultural) aspects of a child's learning, making a cross-comparison most challenging. It is also important to note that these theories are predominantly Euro-centric which shaped the research itself, even though it has become globally accepted. Finally, the position of the four main theories will be summarised. Behaviourism as a term was introduced by John B.Watson in his publication "Psychology as the behaviourist views it" (1913). He said that psychology should be an objective science and therefore concentrate on what can be observed. Child development and learning was seen as any relatively permanent change in behaviour due to the effect of the environment. ...read more.

This makes the child less egocentric. Schemas have a reflex quality to them in the beginning (for instance sucking) and the infant will fit parts of the environment into these schemas (assimilation). Through constant assimilation, the schemas are modified to suit the environment better and this is called accommodation. Behaviour is adapted in a step by step way as the infant combine schemas in order to do new things. They then store the schemas internally where they represent actions ("operations"). By the age of two, the child develops the ability to combine representations into sets of actions which signifies the start of the second stage: the pre-operational stage. He also identified that children lack the concept of conservation (that a quantity is still the same even if it is presented in a different way) at this stage. As they progress through the third stage (concrete operations stage) the child also start to act more appropriately on the environment as they generate "rules" based on their own experiences. Eventually by the final stage from about 12 years onwards (formal operations stage), they learn to reason also in a purely abstract and hypothetical way. It should be noted that subsequent research by Donaldson (1978) and others, show that children can operate at a higher level than that predicted by Piagetian theory. ...read more.

218). Social constructivism can be seen as a contextualist theory because it links children's learning with their socio-cultural environment. This is also evident in the difference in children's performance in the standard Piagetian conservation task and a modified version by Light and colleagues (1979). In the modified "chipped beaker" version, a social element were introduced and the children performed better because it made sense. Children therefore actively try to identify meaning in apparently meaningless tasks of learning and they construct their own learning within the zone of proximal development (ZPD), by appropriating their thinking. Classic behaviourism is most clear in its view that the child is passive and is influenced by the environment. Behaviourism therefore does not support the idea that the child is active in constructing their own learning. Bandura's social learning theory and social constructivism by Vygotsky supports the fact that children are predominantly active in their learning. However, both these theories also recognise a passive element in a child's learning from the effects of social and cultural influences. Piaget's stage theory considered mostly the cognitive development of the child and only recognised the active role of the child in constructing their own ideas about the world. Therefor, some of the theories support the fact that children are active in constructing their own learning and some do not. ...read more.